Til the crack of dawn

Donk said:
I done been sayin' since like 2008 that I carry because of pit bulls and the like, as much as anything else.
Click to expand...

I'll show you the steel bitch

onpoint said:
Fuckin lanky ass niggas trying to front on me with their dog

I'll show you the steel bitch
Click to expand...

A Pit Bull is nothing but a felony with four legs.

sisu said:
A Pit Bull is nothing but a felony with four legs.
Click to expand...

What's the difference between a nigger and a Pibble?

Kyleen Waltman​
You see the headline and you want to make a joke about white women owning pit bulls being like white women dating black guys, just slightly safer.

But these weren’t even her dogs.

I’ve never heard of someone waking up from a coma and freaking out and being put back into a coma. Wouldn’t they just give her morphine or some tranquilizer?

It’s not safe to repeatedly put someone into a medically-induced coma.

He should get the same punishment if he himself had chewed the woman’s arms off, which should be the death penalty, but would at least be 20 years in prison.

This is a white guy.

Justin Minor​
Every pit bull owner should be charged as if they committed the crime.

At the very least.

Why is this allowed?

Because there is only one breed of dog – the dog breed?

Related: Pit Bull Rips Mother’s Arms Off, Kills Her for Stopping Him from Eating 4-Year-Old Son

These idiot doctors revived her. For what? They should've let the woman just die now she has to live with no arms and a colostomy bag the rest of her life. I'm sorry a colostomy bag is bad enough but no arms on top of that? Just let God take me. Fuck that. 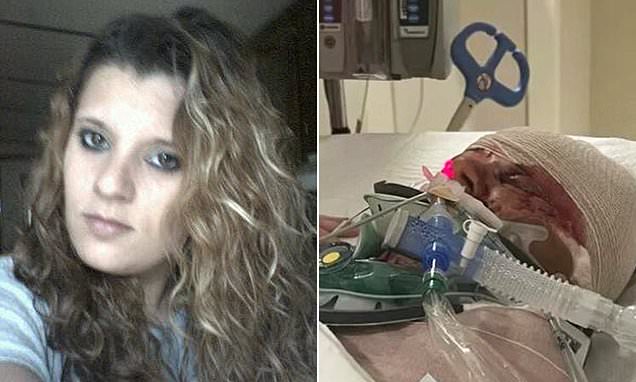 Kyleen Waltman, 38, was mauled by three pitbulls last month while walking to her mother's home in rural Honea Path, about 80 miles northwest of Columbia.

www.dailymail.co.uk
A South Carolina mother of three, who had both arms amputated after a recent dog attack, now faces the possibility of losing her leg.


Kyleen Waltman, 38, was mauled by three pit bulls last month while walking to her mother's home in rural Honea Path, about 80 miles northwest of Columbia. She has since undergone 10 surgeries and has lost both her arms.

When she woke from her coma to be told she'd lost both her arms, she was so distraught she had to be sedated again. Now the mother-of-three faces losing her left leg.
'They skin grafted the right leg, but the left leg is still up for amputation if it doesn't start to heal,' her sister Amy Wynne, 41, said on GoFundMe.
In her latest battle, doctors have performed a tracheostomy on her, which is when a hole is cut in the neck of a patient and a tube inserted to their lungs to help them breath. She also had to have a shunt put in her left lung to help with the fluid.

Be fit--be fit! For Honour's sake be fit.

Jay.Que.88 said:
To be fair, I would probably freak out under the same circumstances.

Holy heck, losing both arms. Yeah, not being able to wipe your ass for the rest of your life would truly suck.
Not being able to play the guitar or piano, or grab boobies.

(yeah, you could get a bidet, and you would be able to probably manipulate the buttons with your toes, and then sit down again quickly, but still.)

Anything not a death or dismemberment situation can have a silver lining.
But she did get dismembered.

Everybody take a deep breath and thank God that you have hands and arms.
We are truly blessed.
Click to expand...

A couple days after this story/thread I remembered something I wanted to post.
Only getting around to it now.
Can't believe this was only early April. The year is flying by.

A long time ago, @anti-barabas-ite posted a link to an excellent interview:

Watch how times have changed and how fast. 1992 interview. It's called the quickening. Demons have really pushed our people to the edge ...
gameruprising.to

Since he shared it, It's an interview I come back to every few months and listen to a few times.

There is so much good information and ideas, I feel if I could implement a portion of the ideas my productivity would increase exponentially.

Q: Tell me your favorite success story of an individual or a company. The best success, the best example of success that you've seen.

A: Two years ago while speaking for the Department of Defense in Colorado Springs I heard a young speaker named John Foppe, who was nineteen years old speaking also at the Department of Defense. John was born without arms. As a matter of fact he had a number of significant difficulties. They gave him not even one chance in a hundred of living. He had no hip sockets or anything. That young man stood up there with the poise and confidence like you just can't believe. Over a period of time I came to know John, was so impressed with him that for the first time in my career I invited an outside speaker to join our staff. We normally raise our speakers up internally. To watch John Foppe and to hear the story of how his mother, particularly, brought him along, the things that she did when at age ten, and we've got a picture of John, drinking a glass of milk with his feet when he was two years old--at age ten she refused to let the other boys in the family help him to do anything--he had to completely do everything on his own. He drives his car, he travels by himself; to watch him scramble an egg, for example, or put sugar in a cup of coffee, with his feet, watch him write, and the way he handles a telephone, all of these other things;

at age ten he was having, as he said, a pity party one day, his mother didn't say a thing. She simply put a newspaper article in front of him for him to read. It was about a little girl who didn't have any arms either. But neither did she have any legs. And John said that was the last time he really felt sorry for himself.

what he's doing with his life, is in my mind, one of the greatest success stories I've ever seen.

He speaks all over the country, youth groups, leadership groups, you name it.
Click to expand...

If people get a chance, listen to the interview.

I feel like this Zig Ziglar interview is the sort of philosophy that Gamers need to apply for success in the world, individual and collectively. Due to global and various national events, we often seem to have a defeatist attitude--we feel like we are losing and we get depressed. This leads to more defeat and more negative feelings. If we would instead use positive philosophy, such as that taught by Zig Ziglar, Jim Rohn, Napoleon Hill, Earl Nightengale, Bob Proctor, and others, I feel that we would have a more powerful and positive impact on the world.

Old World Underground
🐸 Citizen of the Internet 🐸
⏰☕🚬🚽🚿🪒🏋🏻🥓
We have a vicious dog in our neighborhood owned a disgusting family of spics. The dog gets loose regularly, and our worthless town government does nothing about it, despite there allegedly being an "animal control officer." The dog is some kind of nigbull mix; I've had to hose it down the driveway with high-pressure bear spray when going out to my car.

Yet another reason we're moving to a small town next month.

Sven Hassel said:
That scumbags shoulders are about 3 feet wide each.
View attachment 95881
Click to expand...

looks like he is wearing a barber shop cape. Did they arrest him at the barber shop?

MichaelWittmann said:
We have a vicious dog in our neighborhood owned a disgusting family of spics. The dog gets loose regularly, and our worthless town government does nothing about it, despite there allegedly being an "animal control officer." The dog is some kind of nigbull mix; I've had to hose it down the driveway with high-pressure bear spray when going out to my car.

Yet another reason we're moving to a small town next month.
Click to expand...

Leave some antifreeze out for it.

glaucon said:
Leave some antifreeze out for it.
Click to expand...

Seriously. If there was a dog like that anywhere near me, that would only happen once before it tragically died from eating a steak stuffed with rat poison.

Angryguy said:
L
looks like he is wearing a barber shop cape. Did they arrest him at the barber shop?
Click to expand...