In case you thought the IRS needed 87,000 more agents to help you with your tax returns and audit billionaires, watch this: Highlights from the IRS Adrian recruiting project.

80,000 recruits pending. Enforcement will be as little as a $400 tax deviation. pic.twitter.com/xFyEp188ez

Haha. People were saying this wasn’t real, hahaha. The IRS is coming to kill everyone haha.

They’ve got an Islamic assault-tank unit at the top of the squad, haha.

Seriously though: people are saying this “we’re arming the IRS” thing is some kind of psy-op, because it doesn’t make sense why they would need to send the IRS to kill you when they could just send the FBI or the BATF or whatever.

After seeing the pictures and videos, it does kind of look like a psy-op. It’s not clear at all when an IRS agent would need to shoot someone, and they’re making this big deal out of it.

That said, at this point, if they just started sending brown when and wheelchair hajis to murder people and loot their safes in the name of tax collection, I wouldn’t really be totally surprised. The other thing is: the IRS is hiring 87,000 new people. The FBI only has a total of 35,000 employees.

If all of these new IRS agents are going to be armed and trained in home-invasion and murder tactics, then this can just be looked at as a new fed standing army. For comparison: 90,000 is probably the number of Russian troops that were sent in the initial invasion of the Ukraine (if you google it, you’ll find Zelensky and the Pentagon saying 200,000 invaded, but then you see that the Pentagon said 2 weeks ago that 80,000 Russians have died. They are dumb liars lying to even dumber morons, so they overestimated the invasion size so they could overestimate the death toll.)

Imagine if the government had said they were hiring 87,000 new FBI agents. People probably would have been more upset about that. But the Democrats told their people that the 87,000 IRS agents were being hired to audit America’s 600 billionaires.

Failed to declare that Christmas money from grandma ? Prepare for that audit…and some gunfire.

Ooh look, they are showing how you can put someone in literal chains for not paying the government.

Something tells me they’ll be busting down the doors of people who don’t support the regime.

I like how they chose the landscaper and not the billionaire tycoon they pretend they are going after.

👑
🐸 Citizen of the Internet 🐸
🎩
⏰☕🚬🚽🚿🪒🏋🏻🥓💻⛪️🍖 💻🥩🥃
Escaped True Master
Destructive Ceremonious Master
The CDC and DHS were coming to your house to force vax you a year ago. Didn't happen.

Cave Beast
🐸 Citizen of the Internet 🐸
⏰☕🚬🚽🚿🪒
That's exactly what I'm thinking. This is the beginning of the civilian military force that Obama talked about. More or less. They want a lot more armed feds basically and yeah, 87,000 new FBI agents would be insane.

The other thing is that these people can help fund themselves by just going around and looting Americans.

IRS police training 80,000 recruits pending. Enforcement will be as little as a $400 tax deviation.
Click to expand...

Don't a lot of democrat cities just ignore theft when it's below $1000? Then small business that can't afford private security suffer. However if those businesses have deviated by $400... 👮‍♂️
Last edited: Aug 18, 2022

Cave Beast
🐸 Citizen of the Internet 🐸
⏰☕🚬🚽🚿🪒
They don't look that intimidating to me.
Are we fresh out of lean special ops types with military haircuts?
And do they all have undergraduate accounting degrees, or are these recruits merely hired muscle?
I'm thinking of the scene in "The Untouchables" where Charles Martin Smith's character, shotgun in hand, yells as he charges the gangsters on the bridge.
IIRC, he's killed in that scene.
Good movie, tho'.

Old World Underground
🐸 Citizen of the Internet 🐸
⏰☕🚬🚽🚿🪒
Imagine the humiliation when you'll be taken away to the FEMA camp not by muscular FBI Mormons with a strong jaw, but by IRS brown cripples and fat women.

🐸 Citizen of the Internet 🐸
⏰☕🚬🚽🚿🪒🏋🏻🥓
Escaped True Master
They need more domestic terror so they are gonna send these morons with guns all over to get wasted by drunk hillbillies. This is a psy-op and these people are sacrificial pawns.

Elvis Dunderhoff said:
After seeing the pictures and videos, it does kind of look like a psy-op. It’s not clear at all when an IRS agent would need to shoot someone, and they’re making this big deal out of it.
Click to expand...

Those giggling females sound like some lecturer just told a Jesus joke at an evangelical youth camp. Absolutely ridiculous.

Old World Underground
👑
🐸 Citizen of the Internet 🐸
🎩
⏰☕🚬🚽🚿🪒🏋🏻🥓💻
This is why jails and prisons have been cleared out of black and brown killers and rapists - so Whites who didn't declare $601 on their tax return could be jailed for life.

Soon to arrive at your door, the IRSs new diverse agents. 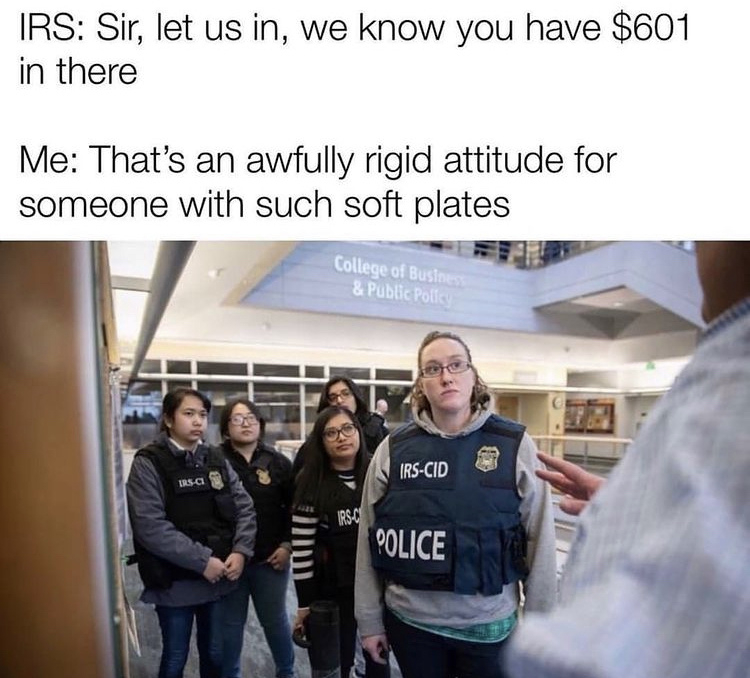 Old World Underground
👑
🐸 Citizen of the Internet 🐸
🎩
⏰☕🚬🚽🚿🪒🏋🏻🥓💻
The IRS can borrow these targets from a few years ago used by the DHS for shooting practice against White Americans.

The targets also say "no hesitation."

Old World Underground
👑
🐸 Citizen of the Internet 🐸
🎩
⏰☕🚬🚽🚿🪒🏋🏻🥓💻⛪️🍖 💻
You know what I'm glad to see polio is making a return in these big blue cities, because democrats deserve to have the few kids they are still having turn into crippled freaks for life.

I'm glad that tens of thousands of old democrat boomers died in nursing and long term care homes in big blue cities due to neglect and abuse by negress and Mexican nurses during the flu hoax.

I'm glad to see shooting homicides, and life altering shootings skyrocketing in big blue cities, maiming for life and snuffing out thousands of democrats of all walks of life.

We don't encourage or endorse illegality blah blah blah, but these people deserve everything they get. Fuck them and their families. We have nothing in common other than geographic proximity.

CMcGillicutty said:
We have nothing in common other than geographic proximity.
Click to expand...