The good guys named their secret organization “Cobra” for some reason.

You’d best start believing in the media hyping up jingoism in preparation for a war with China.

Saying this is leaked from a Chinese lab is no longer a racist conspiracy theory. The highly progressive anti-racists are now endorsing it.

Senior members of the UK government have become less skeptical of the fringe theory that the coronavirus pandemic came from a lab in Wuhan, China, the original epicenter of the outbreak, high-ranked sources told the Daily Mail.

A member of Cobra, the emergency committee led by Prime Minister Boris Johnson, told the paper that while it’s still believed that the virus originated from animals, intelligence reports have not ruled out the possibility that the deadly illness was man-made.

“There is a credible alternative view [to the zoonotic theory] based on the nature of the virus. Perhaps it is no coincidence that there is that laboratory in Wuhan. It is not discounted,” the unnamed source told the British paper.

Rumors that the Chinese authorities had something to do with the outbreak have been solely based on the fact that Wuhan is home to the Institute of Virology. The facility, which is believed to have the most advanced labs in China, is located a dozen kilometers from the wildlife market that was pinpointed by Beijing as the source of the pandemic. Experts at the institute were the first to suggest that the disease had been transmitted to humans from bats.

Suggestions that Covid-19 was man-made were thought to be mere conspiracy theories unsupported by any actual proof, but it has now emerged that this possibility was discussed at the highest level in the UK.

Some experts have put forward the theory that the virus may have accidentally leaked from the lab. Professor Richard Ebright of Rutgers University’s Waksman Institute of Microbiology told the Mail on Sunday that, while Covid-19 is clearly not a bioweapon, it could have escaped from the facility by accident.

Ebright claims to know that the Chinese virologists employed insufficient security measures during their studies, creating a situation in which “virus collection, culture, isolation, or animal infection would pose a substantial risk of infection of a lab worker, and from the lab worker then the public.”
Click to expand...

They are going to announce that this is true, that they have intelligence that says it. Then from there they’re going to start saying it was on purpose.

The kikes are already starting up the atrocity lie machine in full force, talking about this stupid organ-harvesting hoax. They’re talking about terrifying purges.

I don’t know what to tell you, friends: this is happening. In order to reboot the economy after this flu hoax, the West is going to attempt to start a war with China.

I don’t know how that is going to work out, but that is the plan on the ground right now.

Old World Underground
CV now so obviously a big fat hype.
Scary that there are still so many believing it.
I cringe when I receive messages from rational people who should know better, but sadly their minds have been totally hijacked.
Corona panic instituted to roll out a mandatory corona dot vaccine.
War with China to get out of the depression, for the kikes to complete their world take over, whilst making trillions off our dead bodies.

Old World Underground
👑
🐸 Citizen of the Internet 🐸
🎩
⏰☕🚬🚽🚿🪒🏋🏻🥓💻⛪️🍖
It's funny British intelligence of all people are shilling this hoax. Given they of course were the CIA's source for the Iraqi WMDs hoax (of course if you talk about this around ZOG indoctrinated normiecons, they'll shriek about how there were WMDs, because some jew wrote in the jew york times wrote about chemical weapons US troops found, that were manufactured BEFORE the first Gulf war, not afterward as Bush claimed).

I also suspect that British intelligence poisoned those people with Novichok, and that other guy with Polonium, to frame Russia. I don't think Russia assassinated those people. I'm sure somebody here can redlist me here on some big brained reason why the Brit glow niggers would want to kill those people, but it could be as simple as rentseeking, wanting to justify their wages and be handed a blank cheque. Whistleblowers within British intelligence have admitted British intelligence staged false flag attacks, murdering innocent civilians in the process, during the Troubles to make the IRA appear to be a bigger threat than it actually was.

If only you knew how tiresome things really are

CMcGillicutty said:
I also suspect that British intelligence poisoned those people with Novichok, and that other guy with Polonium, to frame Russia.
Click to expand...

Anyone who thinks it wasn't the Brits doing the poisoning probably also believes that Epstein killed himself. 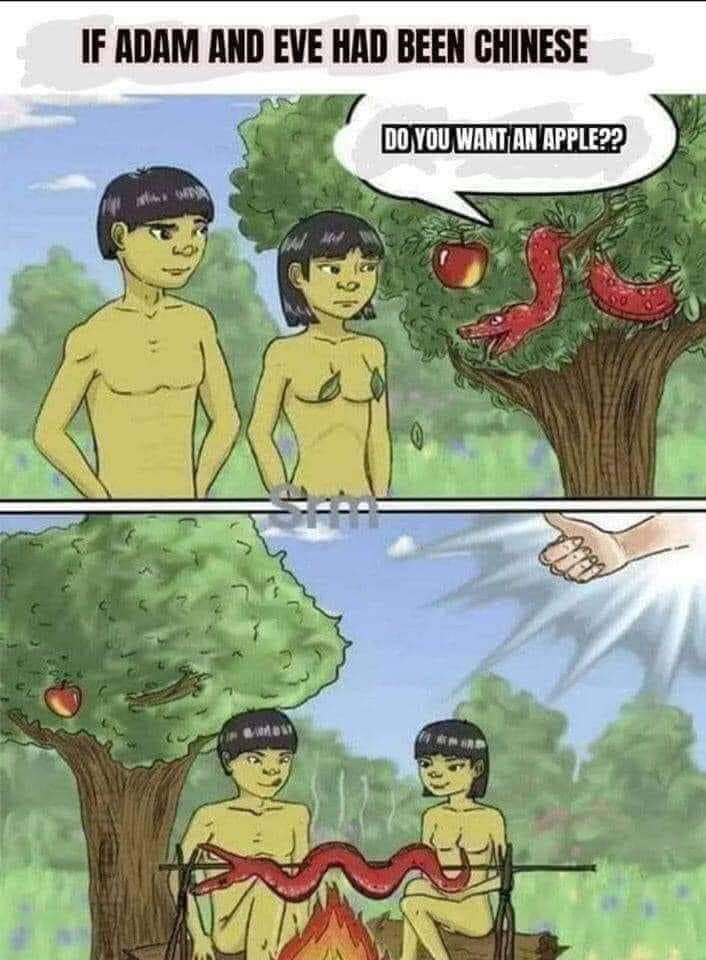 Old World Underground
If only! 😂

Andrew Anglin said:
I don’t know what to tell you, friends: this is happening. In order to reboot the economy after this flu hoax, the West is going to attempt to start a war with China.
Click to expand...

It does seem so, yes. Very disturbing.

I mean, the Chinese are a disgusting, extremely gifted people.

CMcGillicutty said:
British intelligence poisoned those people with Novichok, and that other guy with Polonium
Click to expand...

I'm with you for the most part but I am uncertain there is such a thing as Novichok and I am certain that if it does exist it was not used on that former spy (The media likes to call him a former Russian spy but in actuality he is a former British intel asset who happens to be Russian). I believe its an entirely fictional device used to point the finger at Russia. "Only the Russians have Novichok" etc. The various Polonium poisonings also are said to be linkable to Russia because "only Russia has Polonium" or some such nonsense. I want to keep my marginal fedposting to a minimum but Polonium can be obtained from a number of over the counter consumer products including dust mitigation brushes. It only takes a tiny amount to do significant harm to a person. Literally anyone could have done those Polonium poisonings.

British intel gave us the Steele Dossier as well as the Iraq WMD hoax. In fact their malfeasance goes back much further than this. My policy is to believe the exact opposite of anything British intel is selling.

Just once I'd like to have the good guys come out on top.

Old World Underground
🐸 Citizen of the Internet 🐸
⏰☕🚬🚽🚿🪒🏋🏻
You have no idea how much I love 19th Century History. Particularly European/Chinese history. Treaty ports in China are basically Heaven for me. I love Shanghai, but Tianjin and Amoy are equally places I would want to live out my days if I had a choice. When I die I want to be buried in the mountains of Fujian. If not there then in Suzhou near my father-in-law.

Chinese are a great but xenophobic people. When most of the West had turned to barbarism after Rome, they were developing sophisticated societies. In the modern era it is funny how they still remain xenophobic after the British pushed opium into every port they possibly could. Totally weird.

I've spoken before about the Uighars and how I think it is terrible what is happening to them. I feel the same way for them as I do for the Tibetans and the Palestinians. Smaller, not great peoples, smashed beneath the brutal designs and powers of more magnificent others. I'm part Welsh, Irish and Scottish, maybe that explains it.

But there has been a consistent propaganda war against China for quite some time. And at the same time anyone who is not on the right side of history pointing out the disproportionate amount of Chinese investment or immigration to the West has been demonised as racist. And the numbers of PRC citizens granted residency in the West has not slackened one bit.

Obviously we are now meant to learn to hate China like our ancestors in the West learned to hate NDSAP Germany and Soviet Russia. And it will be easier because we aren't Chinese. ZOG will rely upon our racial differences to sustain its Chinese rhetoric at the same time it will deny us the ability to acknowledge those differences.

Highlander said:
Why do I get the feeling that the Jews are going to win yet again?

Just once I'd like to have the good guys come out on top.

This is at least the fifth theory I've seen as to its origins.

And here I was sure the Chinese stole it from the Canadians:

Coronavirus Bioweapon – How China Stole Coronavirus From Canada And Weaponized It

Coronavirus Bioweapon : How Chinese agents stole Coronavirus from Canada's National Microbiology Laboratory and weaponized it into a Bioweapon. Old World Underground
🐸 Citizen of the Internet 🐸
⏰☕🚬🚽🚿🪒🏋🏻🥓
Sometimes I wished we lived in the timeline where Imperial Japan cleansed the planet of Chinese existence.

AbsurdinessBrown said:
You have no idea how much I love 19th Century History. Particularly European/Chinese history. Treaty ports in China are basically Heaven for me. I love Shanghai, but Tianjin and Amoy are equally places I would want to live out my days if I had a choice. When I die I want to be buried in the mountains of Fujian. If not there then in Suzhou near my father-in-law.

Chinese are a great but xenophobic people. When most of the West had turned to barbarism after Rome, they were developing sophisticated societies.
Click to expand...

I get what you mean in some ways, but China's 'sophisticated society' ended up geting conquered by the Mongols for several hundred years. Plus the longest empire in the world wasn't Han-Chinese, but Byzantine Roman.

I know A. Anglin likes Commie China but I don't, I think they've been off-course since the good guys lost in the 1940s and the remainder fled to Taiwan. The sooner that country returns to tradition the better, hopefully once they kick out the communist government.

Old World Underground
🐸 Citizen of the Internet 🐸
⏰☕🚬🚽🚿🪒🏋🏻
I think now that Mao is dead it's better. The KMT were also notoriously corrupt.

Chinese don't want democracy, they want stability and the chance to make money.

China would indeed be better without 'democracy', but it would be even better with a spiritual hierarchy / leadership and a return to Daoist / Confucian ways.
Having a monarchy or king, emperor like Japan would do them the world of good and keep them focused on China, not exporting their shit around the world etc.

CHRISTmas is about JESUS not santa!

Old World Underground
🐸 Citizen of the Internet 🐸
⏰☕🚬🚽
TBH the only people who gained from all this are the Chinese. They infected a relatively small group of chinks, sent them across the world and then locked down wuhan whilst keeping Shanghai and Beijing open. Essentially fucking everyone else up. The media are critical of the Chinese only when there is news of reopening China as this would cause western governments to reopen. I may be paranoid but I think the majority of the media (apart from right wing outlets in USA and U.K.) actually support China and want America and Europe to economically crash.

Highlander said:
Why do I get the feeling that the Jews are going to win yet again?
Click to expand...

This time nobody wins (except some elite in a bunker) do you think Iran didn't have at least one nuke to target Tel Aviv?

Sardinian_Guy said:
Do you think Iran didn't have at least one nuke to target Tel Aviv?
Click to expand...