Trump Declares an Opening of the Churches – FINALLY

I’ve largely been trying me best to criticize Trump is little as possible, because we’ve got an election coming up that he’s probably scheduled to lose and I would very much prefer if he didn’t lose it. It is good that he is opening the churches.

But wow man – it sure as hell took you long enough. You promised us we’d be open for Easter, none of the facts changed, your strange little goblin Anthony Fauci just changed his graphs, and here we are a month later with at least one church burned down and we don’t know how many pastors arrested or otherwise charged with crimes for practicing their religion in the way that is afforded them by the Constitution you swore an oath to.

Donald Trump has declared churches, mosques and synagogues “essential services” and threatened to override governors who refuse to reopen them this weekend – a power he does not possess.

“Some governors have deemed liquor stores and abortion clinics as essential, but have left out churches and other houses of worship,” the president told reporters at the White House on Friday. “It’s not right. So I’m correcting this injustice and calling houses of worship essential.”

Trump added: “The governors need to do the right thing and allow these very important essential places of faith to open right now. For this weekend. If they don’t do it, I will override the governors. In America we need more prayer, not less.”

After his two-minute statement, the president left the briefing room podium without taking questions.

His remarks sowed confusion because the federal government does not have the constitutional right to unilaterally order individual states to reopen businesses, churches or schools. But they did seem likely to play well with his support base: Trump won four in five Christian evangelical voters in the 2016 presidential election.
Click to expand...

He not only has the right, but the duty to protect the US Constitution from these governors who have illegally stolen our rights using an interpretation of national emergency powers that would never stand up in any federal court.

Trump in fact abandoned his duties as president by allowing these people to take away our freedoms.

Earlier this week the Centers for Disease Control published a 60-page plan for restaurants, schools, childcare programs, mass transport and other businesses about reopening. But it omitted details about houses of worship and faith-based organisations.

“Boy, it’s interesting to be in a room that desperately wants to see these churches and houses of worship stay closed,” she said sardonically.
Click to expand...

Whoa whoa whoa there, Kayleigh – cool it with the anti-Semitism.

The fact that Jews are trying to destroy Christianity doesn’t mean you’re allowed to say that they’re doing that. Saying that things that Jews were doing is what caused the Holocaust.


The Jewish network CNN went ape over this.

They are in such a big hurry to prevent Christians from being able to worship in church.

The big talking point that the Jew media is using against Trump is "the Constitution doesn't give him the power to force governors to open up."

Please remind these same kikes that thanks to the Civil War, every public official in the country swears an oath of loyalty to uphold, specifically, the Constitution of the United States, which the Jew courts have battered us to death with during the civil rights era (applying the Bill of Rights to state and local law... including the First Amendment).

So they can go suck a duck.

Andrew Anglin said:
You promised us we’d be open for Easter
Click to expand...

I forgot he even used to say this. Time in shutdown hell just stretches forever, doesn't it?

Every time the country is supposed to reopen, we just get blueballed with ever-increasing intensity. Didn't that anorexic skinwalker Fauci say that concerts were gonna stay closed until fall 2021 or something like that? Maybe he was just being optimistic.

Uhhhh yes he does have that power to ensure the freedom of religion is adhered to...as well as other rights he has punted on, i.e. freedom of speech

Freedom of Religion and Assembly is in the First Amendment of the Constitution. 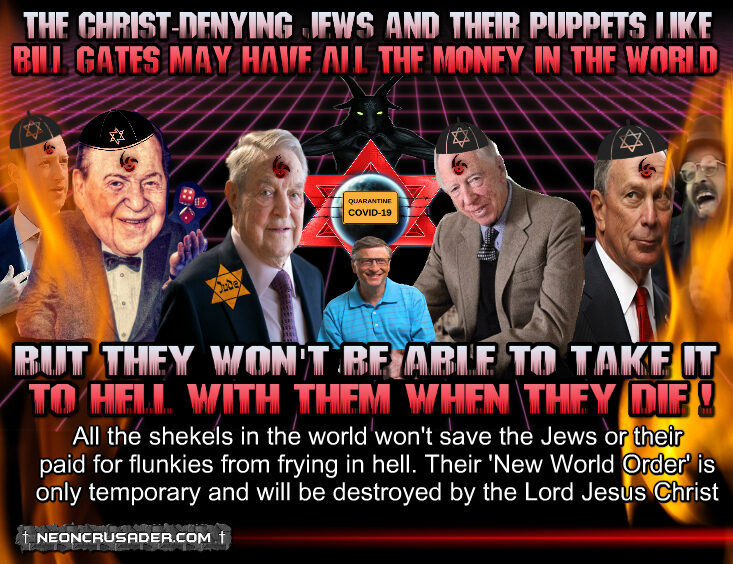 
Just like I can override Govs in opening up economy by Easter and getting our hope high and fooled us better than Anglin and said no power here yo whitee better to elect Hitler and not some Republican libertarian.

He won't do it. Because for him it should happen organically.

Though I loved it to happen but all EO are reserved for Hololost clan.

Rocky from the Backwoods said:
Fuck off Britbong newspaper
Click to expand...

I'm not an American, but it takes some gall to be telling another country's head of state what he can and cannot do; especially, when one is totally off base.

Old World Underground
'”Because he's the hero America deserves, but not the one it needs right now. So we'll hunt him. Because he can take it”

Trump is a true American hero. And his Catwoman, Kaileigh is amazing too.

Old World Underground
"His remarks sowed confusion because the federal government does not have the constitutional right to unilaterally order individual states to reopen businesses, churches or schools."

Ah. But he can withhold federal funding to states for various reasons if he chooses. "Check's in the mail!" should be his reply to these fucks.

UnCL3 said:
"His remarks sowed confusion because the federal government does not have the constitutional right to unilaterally order individual states to reopen businesses, churches or schools."

Ah. But he can withhold federal funding to states for various reasons if he chooses. "Check's in the mail!" should be his reply to these fucks.
Click to expand...

And a state such as California who likes to pretend they stand up to Trump until a fire, mudslide, riot, rain, earthquake hits them and that cry of "help we need federal funds" rings out will fold like a house of cards

Rocky from the Backwoods said:
Freedom of Religion and Assembly is in the First Amendment of the Constitution
Click to expand...