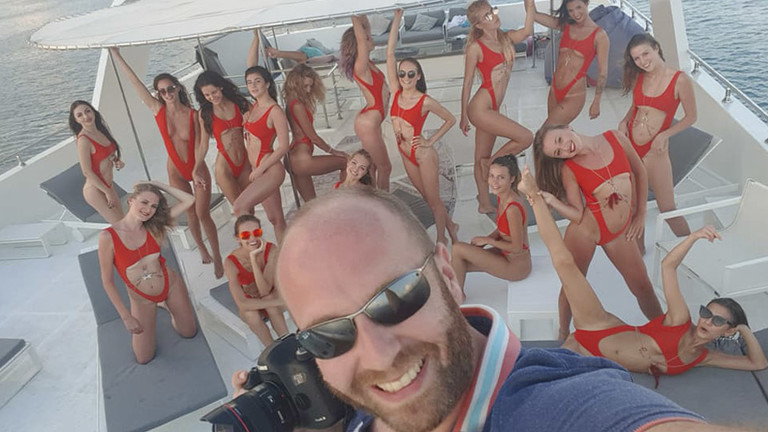 A man purporting to be a US political strategist has reportedly been detained by police in the United Arab Emirates, after more than a dozen models ditched their kit for saucy snaps on a balcony in the conservative Gulf country.
Kiev-based news network Strana reported on Tuesday that Vitaly Grechin, originally from the Ukrainian capital, had been arrested by officers in Dubai. Footage shot by a startled neighbor showed the group posing for naked pictures on the terrace of a high-rise apartment, and went viral online.
Authorities in the Gulf state said that “the recently publicized photo shoot contravened UAE law” and added that “the individuals involved will be deported.” The stunt is said to have contravened laws banning indecency and pornography.
Click to expand...

While the women were identified as being from countries of the former Soviet Union, particularly Ukraine, initial media reports claimed that the male organizer involved was Russian. However, a number of other outlets later identified him as a Ukrainian.
Citing sources in the troubled Eastern European country, Strana claims that Grechin has spent much of his life in America and is notorious for posting pictures of himself surrounded by scantily-clad women. In an interview with the local ‘Exclusive Style’ magazine, he reportedly claimed to have served in the US Army before returning to Kiev to work in the American Embassy.
Click to expand...

At the same time, Grechin is said to have revealed in the archived interview that he had a personal relationship with former US President Barack Obama, and even helped with the financing of the Democratic politician’s election campaign. In snaps posted to his Facebook page, he posed alongside both Obama and former presidential candidate Hillary Clinton. Other pictures show him eating spaghetti alongside George Clooney and staging another sultry photoshoot with models on a boat.
Click to expand...

Old World Underground
🐸 Citizen of the Internet 🐸
⏰☕🚬🚽🚿🪒🏋🏻
My impression of Dubai is that it's a giant brothel run by fat, raghead perverts with scat fetishes.

MichaelWittmann said:
My impression of Dubai is that it's a giant brothel run by fat, raghead perverts with scat fetishes.
Click to expand...