Andrew Anglin said:
As the viciously angry and racist crowd chanted, Trump sucked air through his teeth and tilted his head.
Click to expand...

👑
🐸 Citizen of the Internet 🐸
🎩
⏰☕🚬🚽🚿🪒🏋🏻🥓💻⛪️
I appreciate that you guys are not quoting the highlights from my posts, because otherwise this thread would just get spammed way too much (my posts are great).


Brotaku said:
I think that a lot of former East Block countries were so buck-broken by Soviet rule that it affected their critical thinking faculties. They must have suffered brain damage if they think that the WEF Politburo's agenda is any better than the system the Soviets imposed.

The truth is that life in the Jewish-ruled bloc will be much harsher, more isolated, and dehumanizing than it was for them in even the bleak years immediately following WW2. But they don't see this because of the residual emotional investment these people have with the Western brand as representing happiness, freedom, and prosperity. Conversely, they can see Russia only in terms of its old function as the cultural and political center of global communism, rather than as its very different role as a force that is opposed to a stateless oligarchy whose mania for control makes the likes of Stalin and Beria look positively libertarian by comparison.
Click to expand...

Mine would probably be (excluding Anglin himself obviously):
@Brotaku
@Flaps McKinley
@Flash McQueen
@Rocky from the Backwoods
@FreddieMiles

Coltraine said:
We should eventually do a thread on our Top 5 favorite posters too- I'd reckon.

Mine would probably be (excluding Anglin himself obviously):
@Brotaku
@Flaps McKinley
@Flash McQueen
@Rocky from the Backwoods
@FreddieMiles
Click to expand...

You're way, wayyy too kind, Coltraine. There are several heavyweight effortposters who deserve higher marks than I do on this board. You and Cankles are obviously up there. Also Dr Livci, Mundus, and AstralPepe. Etc. By contrast, Brotaku is the shitposting prole who has his occasional moments of lucidity.

Brotaku said:
You're way, wayyy too kind, Coltraine. There are several heavyweight effortposters who deserve higher marks than I do on this board. You and Cankles are obviously up there. Also Dr Livci, Mundus, and AstralPepe. Etc. By contrast, Brotaku is the shitposting prole who has his occasional moments of lucidity.
Click to expand...

Yeah I totally forgot Mundos and Cankles and the great Dr., Pepe, and others (that JRRusler guy is pretty good), and I generally like all their posts too. But you shouldn't short-change yourself either.
Last edited: Jun 21, 2022

Coltraine said:
Yeah I totally forgot Mundos and Cankles and the great Dr., Pepe, and others, and I generally like all their posts too. But you shouldn't short-change yourself either.
Click to expand...

Career Poster
👑
🐸 Citizen of the Internet 🐸
🎩
⏰☕🚬🚽🚿🪒🏋🏻🥓💻
There is an article up about the vaccine harming male fertility, this was on the comments:

Poundland Mugabe said:
Does this mean fewer men can get pregnant?
Click to expand...


Bernamej said:
5Skin, can I call you Forsekin ?
Click to expand...

One mistake and in internet hell.

Old World Underground
👑
🐸 Citizen of the Internet 🐸
🎩
⏰☕🚬🚽🚿🪒🏋🏻🥓💻⛪️
Prompted by a low-IQ, moralizing, ’You is a hypocrite’-tier (((leftist))) criticism of pro-White politics, Cankles provided a trenchant, impromptu “hidden history” lesson on the disastrous first foray of females into direct political action, writing thus:


CMcGillicutty said:
Yeah, this is occupydemocrats tier. I didn't think RRW was that obtuse TBH, but I don't really pay attention to them anymore.

Look alcohol prohibition was pushed by the liberal feminists of the day, which is something shitlibs never want to talk about. It's not a cohencidence that the temperance movement rose to prominence in the late 19th century as more and more states gave women the vote, and finally culminated in the 18th amendment just before the 19th amendment was passed. I'm not just saying that. The US Senate in 1919 held an investigation which found members of the United States' Brewers Association were actively opposed to and funding the anti-suffragette movement. In many ways, prohibition was the first public policy American women directly influenced which wouldn't have been enacted if we had kept coverture, which is little wonder prohibition failed as miserably as it did: 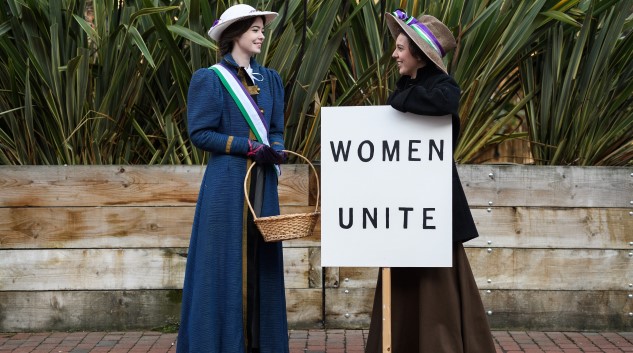 How Big Beer Fought Against Women's Suffrage, And We Got Prohibition as a Result

Adolphus Busch once said that the vote had to be kept out of the hands of the "fanatical and misinformed women."

The two issues were inextricably linked for many millions of Americans back then, but they don't teach you that in the public school history classes about prohibition. The way they talk about prohibition in public schools you'd think it simply popped up into and back out of existence in a complete vacuum. Prohibition is just a brief sidenote before the 6,000,000 words excoriating magic moustache man who again just sprung up into existence for no discernable reason.

It was a bunch of dumb whores who got alcohol prohibited. Yes, many of them identified as evangelical Christians. You couldn't exactly cultivate political power in 1910s America if you denied the divinity of Christ or worshiped some type of voodoo. But these women and their white knights were absolute heretics. They were the 1910s equivalent of the evangelical Christians who today vocally support abortion, sodomy, tranny kids, and black race riots as obsequiously as possible. And all these shitlibs who scoff about alcohol prohibition in reference to conservatives today opposing drug legalization, framing prohibition across contemporary partisan lines, never want to talk about how it was the fault of their ideological predecessors, first wave feminists and classical shitlibs who sympathized with them.

So long story short, no, we're not bringing back some heretic-shitlib policy that failed miserably.
Click to expand...

Old World Underground
👑
🐸 Citizen of the Internet 🐸
🎩
⏰☕🚬🚽🚿🪒🏋🏻🥓💻⛪️
In response to the umpteenth story on the Jewish “Ukrainian“ regime in Kiev once again vowing (in so many words) to fight to the last Ukrainian in their unwinnable war with Russia, marcion observed:


marcion said:
When jews get to make decisions about how many Christians should die the outcome is predictable.
Click to expand...

Old World Underground
👑
🐸 Citizen of the Internet 🐸
🎩
⏰☕🚬🚽🚿🪒🏋🏻🥓💻⛪️
On the Jews‘ use of warrant-less “firearms checks“ and prospective “contact-tracing Covid checks” as obvious modern instances of their Bolshevik behavior, marcion suggested . . .


marcion said:
If jews were any more transparent fuckin' birds would fly into them.
Click to expand...


Mike Sinclair said:
Every meal had to have both rice AND potatoes. That's a lot of carbs
Click to expand...

Rocky from the Backwoods said:
Trump is a piece of shit and he didn't single handedly take down the entire entrenched federal bureaucracy by himself and he's a kikesucker and I'm not a mental child
Click to expand...

Brotaku said:
A woman's attention-whoring instinct is not distinguishable from her survival instinct - they are one and the same.
Click to expand...

A clip from @Brotaku that's just all too concise.

Old World Underground
👑
🐸 Citizen of the Internet 🐸
🎩
⏰☕🚬🚽🚿🪒🏋🏻🥓💻⛪️
Today, Flaps chimed in with this veritable maxim about the problem of Jews in politics:


Flaps McKinley said:
It is impossible to have common-sense, discretionary laws in a country in which Jews have civil rights. A country with Jews has to have laws which necessarily end up tyrannical and stupid, because Jews will otherwise turn the exceptional case into the rule, the wedge into the lever, in order to carry out their agenda. It's beyond tiresome.
Click to expand...

Analysis:
- Political correctoids are not/cannot be intelligent.
Click to expand...

Old World Underground
👑
🐸 Citizen of the Internet 🐸
🎩
⏰☕🚬🚽🚿🪒🏋🏻🥓💻⛪️
@Aryan Uprising resurrected a year-old thread on “vaccine” injuries and (((the elites’))) COVID strategy to reveal this ray of analytical hope . . .


Aryan Uprising said:
You might think that everyway we look, we're cockblocked by zog's power, and in many senses, we are, but look at it from zog's perspective: everyway they look, they're blocked by their inherent contradictions, the incompetence of their moronic beauocratic minions, natural law and God's power.
Click to expand...

Old World Underground
🐸 Citizen of the Internet 🐸
⏰☕🚬🚽🚿🪒🏋🏻
Axually Andrew did.

So, he was fat and black. But just ask yourself: do you remember 32-year-old celebrities dying rando

I simply followed a link from the front page then quickly managed to find a post to argue with (no you didn't).
Last edited: Aug 14, 2022

Old World Underground
👑
🐸 Citizen of the Internet 🐸
🎩
⏰☕🚬🚽🚿🪒🏋🏻🥓💻⛪️
At the suggestion that Donald Trump’s promotion of “fake news” was somehow deficient, Zaldron elucidated . . .


Zaldron said:
The Jewish mass media were promoting a new phrase: FAKE NEWS. This was a word that the right would have adopted, like RACISM and GENDER Like these other words, FAKE NEWS was a word that channeled minds into an antiwhite conspiracy theory with devastating implications. It was directed to justify massive, pervasive censorship, by defining stories other than the mass media's as sinister plots to make people believe in events that had never happened. The media were openly discussing the need for new systems to shut down FAKE NEWS on the Internet.

Donald Trump pointed to the lying mass media, and called them FAKE NEWS. It was meme genius. What he said was obviously true, and he said it over and over. It worked. That's the name of the mass media now. Consequently they have no standing to supervise total censorship, as they themselves are FAKE NEWS. More importantly, they couldn't give FAKE NEWS the twisted meaning they wanted to give it, because, thanks to Donald Trump, this phrase already had a clear, credible, and needed meaning.

Imagine if, when Leon Trotsky was originally promoting RACISM, some meme genius had given the word a different meaning, and made it stick, thus leaving antiwhites without the key term they needed to demonize Whites and justify antiwhite policies.

This is by far the best thing that Donald Trump has ever done.
Click to expand...

Old World Underground
🐸 Citizen of the Internet 🐸
⏰☕🚬🚽🚿🪒🏋🏻
old BBS poster in a thread about Derek black being a fag: who is Derek Black?

Andrew Anglin said:
Another Jew enters the scene lol. Libsoftiktok. Our country is just good jews vs bad jews while we languish in the ass end of the internet. Can anyone hear my goy scream?
Click to expand...


Andrew Anglin said:
This bitch looks like she was born by someone spitting in an ashtray.
Click to expand...