The CDC's Hysterical Delta Flip-Flop Might Be Its Final Undoing

ZeroHedge - On a long enough timeline, the survival rate for everyone drops to zero

The crazy, convoluted, mixed up messaging from the CDC – it's been this way from the beginning of the pandemic until now – has taken yet another turn. Now the CDC is recommending masks not just for the unvaccinated but for the vaccinated too. This is supposedly because of the discovery that the variant known as Delta is making an end-run around the vaccines, causing not only infections but infectious spread. 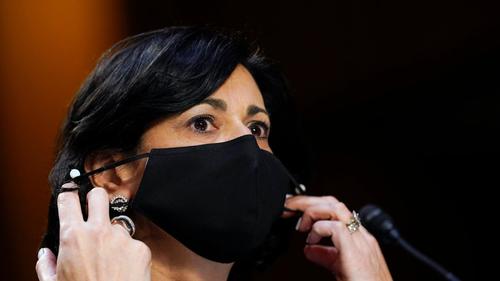 So we have an odd situation developing...

The layperson’s understanding of a vaccine is that it protects a person against infection, like measles or smallpox. In other words, you won’t get Covid, exactly as President Biden accidentally and apparently inaccurately said in a press conference last week.

That is apparently untrue in this case. That realization seemed to dawn on people only a few weeks ago, as reports from Israel revealed that half the new infections listed were with people who had been fully vaccinated.

I pity anyone who took a few weeks’ vacation from the news during this period. We went from believing that the whole point of the vaccines was to protect against infection to realizing that this was not the case. You can still get the bug. The point of the vaccines, we were newly told, is to protect against severe outcomes. Okay, that’s reasonable enough except that we know the demographics of severe outcomes, and hence the question presents itself: why is the policy priority near-universal vaccination?

None of this makes sense – if you are still looking for policies to make sense, which you probably gave up on long ago.

Now to the great mask conundrum.

In May, Anthony Fauci showed up to a Senate hearing fully vaccinated but wearing a mask. Rand Paul lit into him, claiming that this was absurd. Fauci, he said, was undermining confidence in the vaccines. We need to give people a reward for being vaccinated, he said. If you can’t even take off your mask, why bother?

I suspect that the CDC listened carefully to his point. Senator Paul might just be one guy but he is positioned to impact policy because he has unusual access to the public, and to Fauci himself. Fauci is otherwise only on friendly terms with media who listen and adore every pronouncement. Paul has access by virtue of Senate protocol and therefore can make a dent in what’s actually happening out there in CDC land.


The CDC had become very aware that vaccination rates had flattened. They figured it was worth a try. So in early May, the agency did a messaging turnaround. It announced that people who are vaccinated no longer need to wear a mask. Fauci dutifully went on all the talk shows and invited the vaccinated to enjoy their privileges. He even smiled when saying so!

That was an interesting day for me because many of my anti-lockdown friends celebrated that the 16 months of living hell had officially ended. They correctly predicted that everyone, including the unvaccinated would now take off their masks and life could go back to normal. They were correct for everyone except the poor children who, because there is no vaccine for them, became permanently marked as wild-born disease carriers even though they are not.

Hey, the CDC had to be consistent, even when the results were cray cray, and therefore did not exempt children.

Well, how did vaccination rates respond? Far from incentivizing people to get the jab, everyone took off their masks and dared authorities to ask for their papers. This is because after a year and months of egregious restrictions on freedom, people were fed up and looking for some means by which they could pretend to go back to normal. Vaccination rates stayed stuck for the reason that everyone who wanted a vaccine already got it, while the rest possess natural immunity, are wary of the medicine, or were more than willing to accept the risks of exposure.

Now the CDC had a problem. The great goal of a 70% rate among all people was elusive, and infuriating the pandemic planners who demanded this based on the pharmaceutical definition of herd immunity. They embraced that definition because, for some reason that remains inexplicable for everyone not working for vaccine manufacturers, natural immunity has been thoroughly dismissed as primitive and irrelevant. Talk about ignoring the science!

Then on July 22, the influential Washington Post published the following:

So the CDC needs to state, as it should have in May, that unless there is a way to distinguish between the vaccinated and unvaccinated, indoor mask requirements should be reinstated…. The Biden administration has done many things right during the pandemic, but it made a grave error with its premature return to normalcy. It must hit reset and issue new guidance that addresses the escalating infections, waning interest in vaccination and unknowns of the delta variant. If it doesn’t, we could well be on our way to another national surge — and one that was entirely foreseen and entirely preventable.
Click to expand...

The CDC seems more easily led by op-eds in political newspapers than actual scientific papers on the topic, of which there are many thousands now. They want digestible, clear instructions on what they should be doing. This piece in the Washington Post provided exactly that. Thus did the CDC reverse itself yet again.

But in doing so, it needed some rationale. This is when the agency jumped on the excuse of how the Delta variant often evades the vaccines, so therefore even the vaccinated need masks. It’s not clear whether and to what extent the CDC realizes that it has just once again undermined public confidence in the vaccines! The horns of the dilemma are obvious to anyone who is watching this clown show unfold. If the CDC removes the mask guidance, people don’t get vaccinated; if they add it back in, people have another excuse to avoid the jab.

Masks in this case remain what they always were: a tool to prod the public into compliance with other mandates and dictates, purely a symbol of fear and its unrelenting trigger. And with fear comes obedience. Maybe.

The real problem, conclude many, is this bogus freedom of choice. This is why there is more constant talk about vaccine mandates, and why NPR gets breathless with excitement at every new directive – from the Department of Veterans Affairs, for example – of new mandates. What they are really pushing for is a society-wide mandate that would push the shot on everyone. Biden reportedly will impose this on the whole federal workforce.

The Department of Justice has paved the way by issuing an opinion that such mandates are perfectly in keeping with the law. More mayors are backing the idea. The public is warmed up day by day to accept what two years ago would have universally been considered an Orwellian nightmare of passports and papers for access to regular life. It’s completely unAmerican in every way, and wholly unnecessary. It is further proof that once disease panic gets underway, and governments use it to enhance their powers in shocking ways, it becomes extremely difficult to dial it back.

Remember when only the “conspiracy theorists” said that the real goal was a passport and eventually a China-style social credit score?

At this point, anything is possible. The Biden administration can’t even bring itself to lift Trump-era restrictions on flights from Europe, even though every strain circulating there has long been circulating here. The default motive of exposure avoidance has completely spun out of control, holding even basic freedoms in the balance. Today your human rights are wholly contingent on what the pandemic planners desire, whether it is stay-at-home orders, school closures, mask mandates, or compulsory jabs.

What ultimately may be our saving grace here are the furious parents who have just been told that they must once again strap a cloth on the kids’ faces this fall.

These poor kids have been messed with enough as it is.

Maybe this will be the last straw, the final discrediting of the CDC, and the moment at which the American people will demand that enough is way more than enough.

Do you simply not care about my cousin, 😡👇👇 you first-class idjut?

Another sign of the times… @Panzerhund @TimeBandit @Highlander My cousin in New Jersey had to go to the ER today due to a severe asthma reaction. 911 was called and he was transported by EMT. The whole ride to the hospital he was berated by the EMT team for not having had the Covid vaccines...
gameruprising.to

The morphing of medical induced paranoia into a means of harder social control at this point seems untenable. With a vast swath of resistors. In the next quarter as people get fired from jobs, that number should tell a tale of the direction the country turns.

The more that give in to eat and play as usual, will decide our fates.

Cave Beast
⏰
Where I live, the obligation to wear a mask in a store never went away.

Gaiuskekus said:
Where I live, the obligation to wear a mask in a store never went away.
Click to expand...

Cave Beast
🐸 Citizen of the Internet 🐸
⏰☕🚬🚽🚿🪒
Watch if you haven't had enough of Fauci's smarmy, cowardly, two-faced, fake outraged, just all around hell-of-a-guy-for-a-piece-of-shit confrontation with Dr. Paul.

Old World Underground
👑
🐸 Citizen of the Internet 🐸
🎩
⏰☕🚬🚽🚿🪒🏋🏻🥓💻⛪️
Look at the beginning of this video of liberals making music videos idolizing St. Fauci:

That's why you all need to pack up your shit and move to South Dakota. Seriously. I haven't had to wear a mask for so long it's a fond memory. Even Walmart is totally mask free, including the employees since like all summer. Even the newspapers don't mention it until around the 4th or 5th headline. Nobody has gotten Fauci's so called "vax" and the only reason I concern myself with the whole pandemic matter is because sometimes I'm bored; and it's practically all you guys seem to want to talk about anymore.

For fuck's sake! Stop torturing yourselves and come home to a good life.

Watch if you haven't had enough of Fauci's smarmy, cowardly, two-faced, fake outraged, just all around hell-of-a-guy-for-a-piece-of-shit confrontation with Dr. Paul.
Click to expand...