Rescue teams combing the rubble of a collapsed apartment building in Florida are switching from a search-and-rescue mission to a recovery effort.
Click to expand...

The decision comes about two weeks after the 12-storey Champlain Towers South fell in the middle of the night.

Sixty victims have been found and 80 are still missing, Surfside city officials said on Thursday.

No survivors have been found since the initial collapse, and rescue crews say many victims were found in their beds.

News that the rescue mission was ending came during a private meeting on Wednesday between families of the missing and Miami-Dade Assistant Fire Chief Raide Jadallah.

"We've all worked passionately day and night for two weeks to save lives. The announcement today comes as a result of a consensus by those closest to the rescue efforts that the possibility of someone still alive is near zero.

"And while there seems to be no chance of finding life in the rubble, a miracle is still possible."

The teams had been working in continuous 12-hour shifts, and were assisted by crews from Israel and Mexico.

The death toll jumped by 10 on Wednesday, after Surfside officials say they were able to remove a large section of concrete.

Rescuers have been filling buckets with concrete by hand, and passing them down a line as they remove debris. The rubble is being kept in a state warehouse for further inspection.

The mission has been halted several times, due to instability in the mound of rubble as well as Tropical Storm Elsa, which made landfall in Florida on Wednesday.

Meanwhile, a grand jury investigation has been launched to try to determine the reason for the 24 June collapse.
Click to expand... 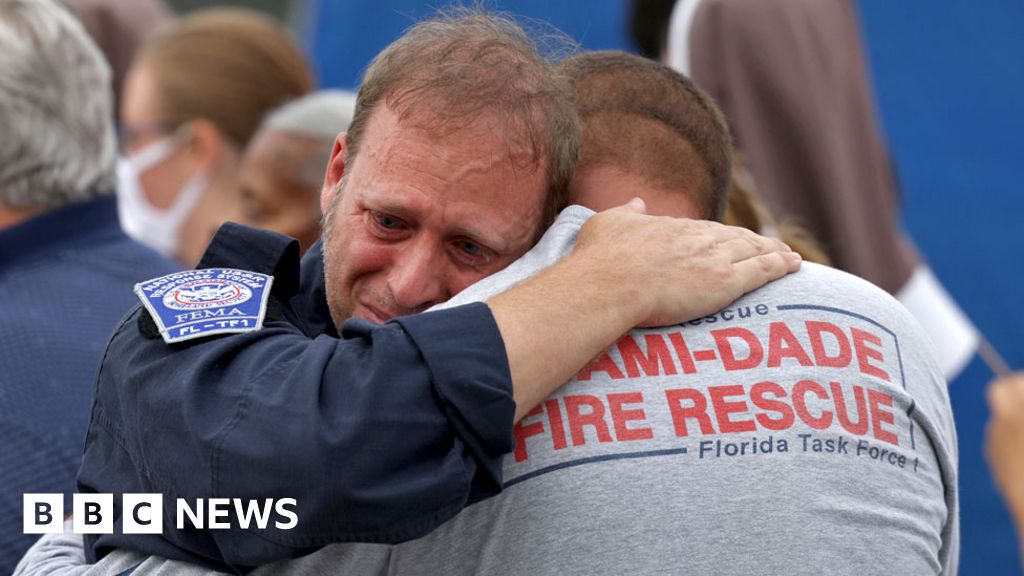 Crews have switched to a recovery operation following the deadly collapse of an apartment block.
www.bbc.com

Old World Underground
👑
🐸 Citizen of the Internet 🐸
🎩
⏰☕🚬🚽🚿🪒🏋🏻🥓💻⛪️🍖
LOL normally (until recently) in these type of disasters huge teams of local people clawed the wreckage immediately after to try and recover survivors within the critical 72h window. Everyone local probably knew it was all kikes and just didn't show. Either that or the residents are all now living in Israel after getting the call for emergency nocturnal dental and dermatological appointments...

More CCTV footage recently released seems to show the flashes of demolition charges coming from the ground floor immediately before the collapse.

Old World Underground
🐸 Citizen of the Internet 🐸
⏰☕🚬🚽🚿🪒🏋🏻
This is really hard to imagine that you are just sleeping and then wake up and get crushed to death by the building you probably over-pay to live in. I wonder if the managers/owner of the building will bill the families for the owed lease money?

Old World Underground
🐸 Citizen of the Internet 🐸
⏰☕🚬🚽🚿🪒
Kikes on the condominium board for this building couldn't resist their urge to haggle the repair costs despite it being a safety issue.

Cave Beast
🐸 Citizen of the Internet 🐸
⏰☕🚬🚽🚿🪒
Knew there would be no survivors on the first day, that type of building collapse doesn't tend to leave any room for survival between the rubble.

Trevor said:
Kikes on the condominium board for this building couldn't resist their urge to haggle the repair costs despite it being a safety issue.
Click to expand...

I bet it is going to come out eventually that most of the units in this building were rented out, and the owners lived in a nearby building that was flawlessly maintained. Why pay twice for something you only use in one place, right?

Other than the oldsters that had been there forever, I reckon.

Cave Beast
⏰
So what exactly is the deal here, they demolished the rest of the building before clearing the rubble with people in it? They lack the machinery to pick up big rocks?

Old World Underground
🐸 Citizen of the Internet 🐸
⏰☕🚬🚽🚿🪒🏋🏻🥓
Miami and South Florida in general are pretty Jewy. What's going to be interesting in all of this, is when the truth comes out. I heard something in passing that something like 245 buildings in the area are suspect. Many of these buildings were constructed during the period of time when Miami was reinventing itself due to the drug craziness. You will see so many Jews pointing the finger at other Jews to avoid responsibility.

Sambo:FirstBlood said:
So what exactly is the deal here, they demolished the rest of the building before clearing the rubble with people in it? They lack the machinery to pick up big rocks?
Click to expand...

Standing portion was moving enough to be detected by the lasers they had trained on it, and they were concerned it was going to fall on the workers searching the rubble (particularly with the hurricane approaching).

Old World Underground
👑
🐸 Citizen of the Internet 🐸
🎩
⏰☕🚬🚽🚿🪒🏋🏻🥓💻⛪️
It would seem the building had some original design flaws that lacked proper supports for the balconies.
The original design had less balconies and a later change was made to allow more balconies, but not enough tie beams, supports or anything were added to take the extra load.
Now, this still may have held forever despite it not being adequate or even over-built to further guarantee integrity.
But water damage and lack of maintenance in a forty year old building was the next part of the equation to guarantee collapse.

The pool deck area concrete was never poured with any slope to contribute to drainage. So standing water was always a problem.
The sub-level area of the pool containing the filter and pump was constantly, but slightly leaking leaving chlorinated standing water to soak into concrete which eventually corrodes the re-bar inside, causes it to swell and cracks and breaks up the concrete around it.
But this was far enough from the collapse area that it was likely not a contributing factor, but just further illustrated the state of disrepair of the property and lack of proper maintenance in general.

Next, water leakage around windows and large planters also caused re-bar to corrode, expand and shatter concrete around the balcony areas was also an issue.
Lack of proper maintenance also a contributing cause.

There was an extensive inspection done three years ago and the water damage, rusty re-bar and concrete damage was seen as a problem that would grow EXPONENTIALLY if not immediately replaced. But this would be such an extensive project and so inconvenient to the building's occupants that it is likely they would not be able to live within the building during a lot of the re-constructive efforts. Upon issuance of this report the repairs should have been started and people should have been finding alternative housing in the meanwhile. For 3 years at a predicted EXPONENTIAL rate the support structures of the building deteriorated enough to cause the collapse.

People are sometimes lulled into a false sense of security and complacency when they see the outer trappings of such a large, beautiful, luxurious and expensive building that it will be just fine structurally when that is not the case.

Jozef_Tiso said:
Miami and South Florida in general are pretty Jewy. What's going to be interesting in all of this, is when the truth comes out. I heard something in passing that something like 245 buildings in the area are suspect. Many of these buildings were constructed during the period of time when Miami was reinventing itself due to the drug craziness. You will see so many Jews pointing the finger at other Jews to avoid responsibility.
Click to expand...

My pops worked in the construction trade along the Florida southeast coast for forty years. He worked within of many beach front highrise projects during the seventies, eighties and nineties. He knew how corners were being cut to make everything as profitable as possible and to get things by inspectors so projects were not slowed down and passed quickly. A lot of malfeasance went on during the eighties boom. One has to look closely at all the paperwork and a complete comprehensive history of a building and the company that did the work to truly know about it.
After hurricane Andrew in the nineties, it became more difficult for builders to skirt doing things properly as building codes were stricter and the inspection process more precise and strict, but the new problem was not about the quality of the work being done, but the use of cheap, inferior quality building materials especially those from China.

Many locals who pay close attention know which buildings have bad reputations and a sordid history.

Nope. Not going there. There is too much evidence this building had been inspected and was in serious trouble for years prior to the collapse.

A couple of people from the building next door heard an initial collapse occur in the parking garage about ten minutes before the big collapse. The recorded it and there were no explosions or charges marking the beginning stages of the collapse.
You must log in or register to reply here.
Share:
Facebook Twitter Reddit Pinterest Tumblr WhatsApp Email Link
Top