Old World Underground
👑
🐸 Citizen of the Internet 🐸
🎩
⏰☕🚬🚽🚿🪒🏋🏻🥓💻⛪️🍖 💻
It is only the second of its kind. The first was found in Russia, and IMO the Russian one was better preserved. It still had its ears. Unfortunately the CBC has the main beat on this, and the mammoth was found on some injun res, so they predictably crammed a bunch of injun race grievance BS into this article, but the pictures and the normal people interviewed are still interesting: 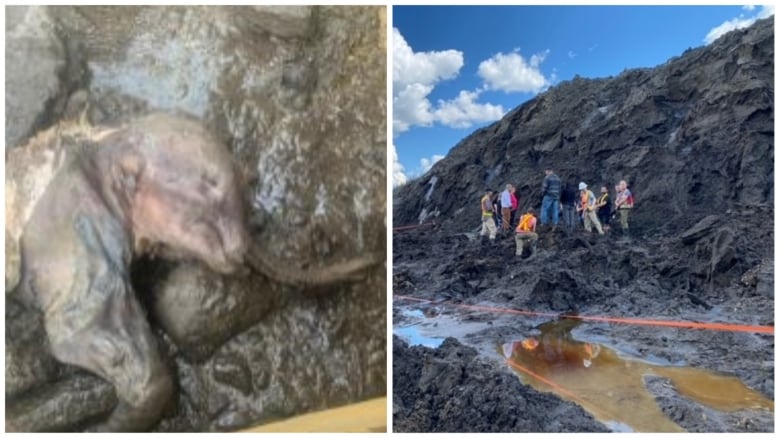 A well-preserved whole baby woolly mammoth was discovered at Treadstone Mine in the Yukon’s Eureka Creek, south of Dawson City, on Tuesday. (Government of Yukon)

A perfect storm of events has led to a once-in-a-lifetime discovery for a gold miner, a First Nation, a veteran paleontologist and a territory.

"I don't know how to process it all right now, to be honest with you. It's amazing," said Dr. Grant Zazula, the Yukon government's paleontologist.

A little after noon on June 21, National Indigenous People's Day, a young miner working in Yukon's Eureka Creek, south of Dawson City, was digging up muck using a front end loader when he struck something.

He stopped and called his boss who went to see him right away.

When he arrived, Treadstone Mining's Brian McCaughan put a stop to the operation on the spot.

Within half an hour, Zazula received a picture of the discovery.

According to Zazula, the miner had made the "most important discovery in paleontology in North America."

It was a whole baby woolly mammoth, only the second one ever found in the world, and the first in North America.

"She has a trunk. She has a tail. She has tiny little ears. She has the little prehensile end of the trunk where she could use it to grab grass," said Zazula. 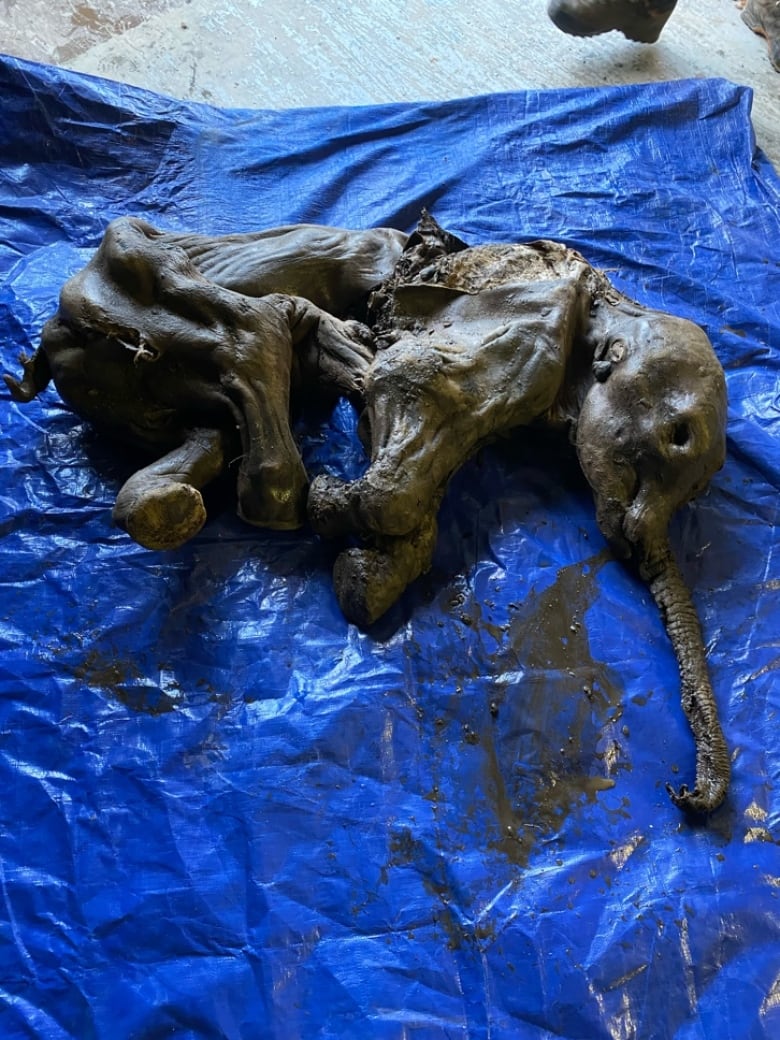 The paleontologist started studying the ice age in the Yukon in 1999.

"And this has been something that I've always dreamed of, to see one face to face. This week, that dream really came true."

For the Trʼondëk Hwëchʼin, on whose land the baby woolly mammoth was found, the discovery was just as important and just as exciting.

"We're all quite excited including the elders and a lot of the staff and members," said Debbie Nagano, the Trʼondëk Hwëchʼin government's director of heritage.

'She would have been lost in the storm'

National Indigenous People's Day is a statutory holiday in the Yukon so when Zazula received the email, he tried to contact anyone he could find in Dawson City who could help.

Two geologists, one with the Yukon Geological Survey and another with the University of Calgary, were able to drive to the creek and recover the baby woolly mammoth and do a complete geological description and sampling of the site.

"And the amazing thing is, within an hour of them being there to do the work, the sky opened up, it turned black, lightning started striking and rain started pouring in," said Zazula.

"So if she wasn't recovered at that time, she would have been lost in the storm." 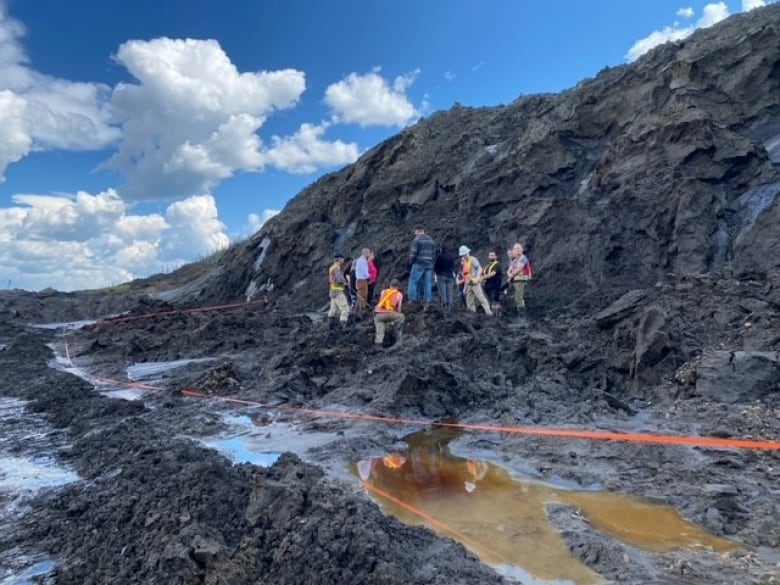 A group of people gather at the site where Nun cho ga was discovered at the Treadstone Mine at Eureka Creek in the Klondike. (Klondike Placer Miner’s Association)

The baby woolly mammoth, named Nun cho ga, which means "big baby animal" in the Trʼondëk Hwëchʼin's Hän language, is about 140 cm long, which is a little bit longer than the other baby woolly mammoth that was found in Siberia, Russia, in May 2007.

Zazula thinks Nun cho ga was probably about 30 to 35 days old when she died. Based on the geology of the site, Zazula believes she died between 35,000 and 40,000 years ago.

"So she died during the last ice age and found in permafrost," said Zazula.

He said that the geologists who recovered her saw a piece of the animal's intestine with grass on it.

"So that's telling us what she did the last moments of her life," said Zazula.

He said the mammoth was probably a few steps away from her mother, but ventured off a little bit, eating grass and drinking water and got stuck in the mud.

"And that event, from getting trapped in the mud to burial was very, very quick," he said.

After Nun cho ga was recovered from the mining site, she was brought to a nearby location where a ceremony took place.

Led by Tr'ondëk Hwëch'in elders, about 15 or 16 people — Tr'ondëk Hwëch'in members, scientists, miners and politicians — gathered in a circle and prayed as Nun cho ga was revealed from the tarp in which she had been wrapped.

"It was very powerful," said Nagano, who added the elders blessed the baby woolly mammoth. 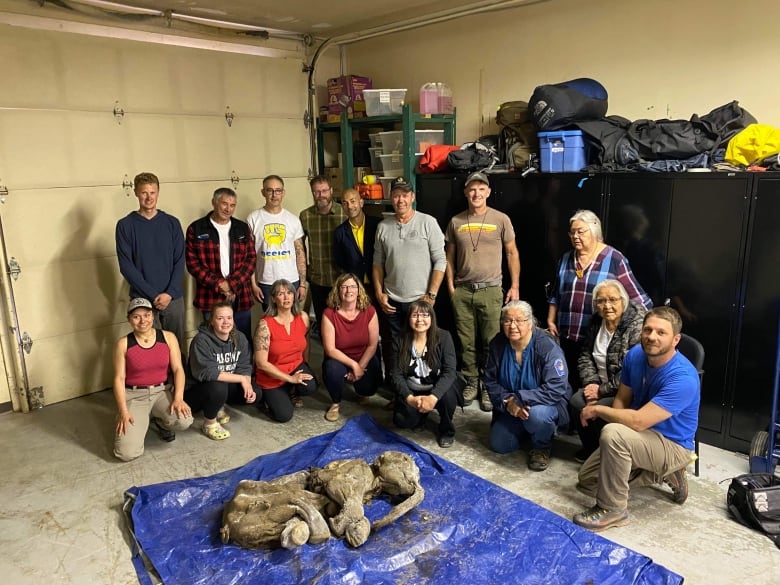 Trʼondëk Hwëchʼin citizens and representatives of the Yukon government, Treadstone Mine and University of Calgary pose with Nun cho ga. (Yukon government)

Tr'ondëk Hwëch'in elder Peggy Kormendy said it took her breath away when the tarp was removed.

"We must all treat it with respect. When that happens, it is going to be powerful and we will heal," she said.

"There will be one thing that stands out in a person's entire life and I can guarantee you this is my one thing," said Treadstone Mining's McCaughan.

University of Alberta paleontologist Michael Caldwell, who was not at the ceremony, said he's spellbound at how time can hold on to such poignant stories.

"It's a miracle of sorts preserved into the present, a scientific gold mine and simply a beautiful thing. For all paleontologists, this is amazing, but for those who work on such things it is breathtaking," he said.

Zazula remains overwhelmed by the finding.

Picture of and link to article about Russian baby mammoth found a few years back:

CMcGillicutty said:
"And that event, from getting trapped in the mud to burial was very, very quick," he said.
Click to expand...

Animals found in permafrost with buttercups still in mouth....

Lord of the Gulf Stream AKA Jack Ketch

Old World Underground
👑
🐸 Citizen of the Internet 🐸
🎩
⏰☕🚬🚽🚿🪒🏋🏻🥓💻⛪️
They never try to explain how these things were obviously flash frozen, not stuck in the mud and died. They have found a few like this, food still in the mouth and everything.

I guess maybe some type of avalanche, but still.

Lmao love how they just had to throw that in.

Blackbeard said:
They never try to explain how these things were obviously flash frozen, not stuck in the mud and died. They have found a few like this, food still in the mouth and everything.

I guess maybe some type of avalanche, but still.
Click to expand...

Animals found in permafrost with buttercups still in mouth....
Click to expand... 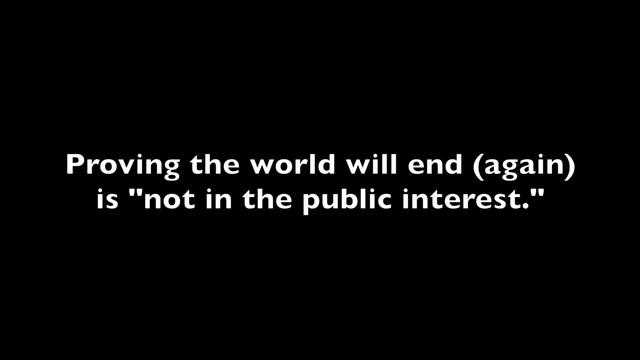 The Next End of the World - C.I.A. Classified Document Released

The C.I.A. classified a 284-page book on earth's catastrophe cycle and crust displacement in 1966. With the focus and publicity of the topic at the time, why classify THIS one, wait so long to release it, and so-heavily sanitize the document down to…

🐸 Citizen of the Internet 🐸
⏰☕🚬🚽🚿🪒🏋🏻🥓💻⛪️🍖
Escaped True Master
Do they know it's gender? Hopefully they can avoid mispronouning it