Phila. Police commanders say the situation has “rapidly gone downhill” along Aramingo Ave. — a “total loss,” they say, from looting. Chopper 3 shows video of demonstrators & police at 52nd and Chestnut. As of this post, no injuries to police tonight. @CBSPhilly pic.twitter.com/cPjyAqSpys

You might as well call this “looting for Trump.”

This is an absolute reminder of what America has to look forward to if Joe Biden is elected.

The city is asking residents to say indoors in West and North Philadelphia, Port Richmond, Kensington and Fishtown. Protesters continue to face off with officers in riot gear outside the 18th Police District at 55th and Pine and along the 52nd Street commercial corridor.

The Philadelphia Police Department is requesting that all residents in the 12, 16, 18, 19, 24, 25, and 26th Districts remain indoors except when necessary. These areas are experiencing widespread demonstrations that have turned violent with looting.

Chopper 3 was over looting on Aramingo Avenue in the city’s Port Richmond neighborhood around 8:30 p.m.

Looters could be seen entering a Foot Locker store.
Click to expand...

Widespread looting continued at a nearby Walmart store in Port Richmond. Philadelphia police tweeted a warning to stay away from the area as a crowd of approximately 1,000 people was looting in the area.
Click to expand...

A large police presence was also seen at a Target store in Port Richmond.
Click to expand...

In West Philadelphia, Chopper 3 was live over a fire burning in the middle of the street around 10:30 p.m. Cars were seen driving around the fire.
Click to expand...

The Pennsylvania National Guard says several hundred members are being deployed to the city at the request of Philadelphia County as the unrest continues.

Thirty police officers were injured during violent protests Monday night, including a female officer who suffered a broken leg after being hit by a car.
Click to expand...

She was literally run over by a big truck driven by a BLM activist and Joe Biden voter – while the black mob cheered!

At the Philadelphia BLM riot, a cop got hit or run over by a speeding vehicle. pic.twitter.com/S12XuEoNAi

Is this what you people want to see in every city, every night, while you’re locked in your home?

Look at Tuesday night in Philly:

Philadelphia rioters and looters destroying the inside of a Dollar Tree. pic.twitter.com/J4Gj2yz75R

A Philadelphia Foot Locker was looted clean at the BLM riot. Video by @Julio_Rosas11: pic.twitter.com/GBN3TXc3Vk

Mass looting breaks out in Philadelphia tonight in the latest BLM inspired riot. A Walmart is being ransacked. #BlackLivesMatter pic.twitter.com/fYH27qnd3O

Many cars rush in and out of the parking lot of a Walmart being looted at a BLM riot in Philadelphia tonight. pic.twitter.com/TSNtcCKweQ

Walmart, five below and multiple other stores targeted pic.twitter.com/gbn9eMVvzk

It wasn’t get dem niggas – the Antifa showed up on Tuesday, as was predicted.

Some nigga got a washer.

At the BLM riot in Philadelphia, a looter wheels a large appliance out of the store. pic.twitter.com/gmcsebGLDJ

They looted a Chik-fil-A!

I’m not sure what there is to loot at Chick-fil-a but rioters broke into one anyway at the BLM Philadelphia riot. Video by @Julio_Rosas11: pic.twitter.com/DMcCcfcI49

What is there to loot in a fast foot restaurant???

They were looting the chicken???

There was also a shooting last night, during the riots.

The police say there was a double shooting at Aramingo and Castor in Port Richmond amid the looting around 8:45. One of the victims is a 15 year old girl, in stable condition. @KYWNewsradio

Elijah Schaffer was on the ground and got jumped like a bitch.

Tonight, I was jumped by BLM rioters while covering the civil unrest in Philadelphia

They tried to rob me as well but I was able to get away without losing my phone
pic.twitter.com/DrgnbE20wA

BREAKING: I was jumped by BLM rioters while they were looting more than a dozen stores,

Though in pain, I didn’t stop reporting because

Americans need to see what the corporate media refuses to show
pic.twitter.com/VI5hl8uV3C

Reporter @ShelbyTalcott took these images shortly after I was assaulted by the BLM rioters https://t.co/sO1sEAyHnH

Nah, Elijah is a brave guy. Or stupid. Going into a store that blacks are looting is just nuts, actually. I’m surprised he didn’t get stabbed to death.

If you’re going to do this, you should make them think you’re one of them. A lot of the blacks are wearing masks – just put a mask on, and put dark makeup around your eyes.

They won’t notice you as long as you don’t stick out.

Car doing spins at a riot in Los Angeles caught on fire. pic.twitter.com/Zj2i7nwUdK

Rioting in NYC tonight in support of the BLM Philadelphia riots. pic.twitter.com/9qy9bfkoX2

These riots are for a black man who rushed the cops with a knife.

The man, it turns out, is a convicted felon who was awaiting trial for threatening to shoot a woman and shoot her house up.

Walter Wallace Jr., the Philly man who pursued police w/a knife before being shot, was a rapper. The convicted felon was awaiting trial for threatening to shoot a woman & her house up. In 2017, he pled guilty to putting a gun to another woman’s head. #BLM https://t.co/flL5BBDmR0

Walter Wallace Jr., who was shot by Philadelphia police, had a criminal history, rapped about shooting copshttps://t.co/zidwJ3lPyY#WalterWallace #phillyriots

It’s interesting that at this point, “he attacked the p0lice with a knife” is no longer a valid reason for police to shoot someone.

At that point, why do they even need a shooting as a pretext for a riot? They might as well just start riots randomly.

My favorite part of last night’s right was when the Black Lives Matter protesters confronted Amalek.

Black Lives Matter rioters in Philadelphia threaten, assault, and chase out Jewish residents claiming "you don't live here" and call them members of the "Synagogue of Satan." pic.twitter.com/pKEssPeGLi

Keemstar noted that it is kind of amazing that this wasn’t even trending.

City of Philadelphia has fallen, police have backed down & criminals have taken over the city

it’s not even trending!

But of course, that’s because Twitter is burying it, because the media has decided to cover all of this up, as they don’t want it causing people to vote for Trump.

The Democrats initially liked these riots and were encouraging them on TV – you remember Chris Cuomo, saying “who said a protest is supposed to be peaceful?”

CNN's Chris Cuomo: "Please, show me where it says protesters are supposed to be polite and peaceful."

As riots and looting have broken out in cities across the country, this is the message the brother of New York governor Andrew Cuomo shares at the top of his show. pic.twitter.com/ZZ47zpyVlx

They soon learned that actually, normal people are not that into riots and in fact do not like violence on the streets.

But they let this cat out of the bag.

The thing about bags and cats is that once a cat is out of a bag, it can’t get back in the bag.

There is now no way to control the blacks – except for the old fashioned way. That’s why Philadelphia said nothing before calling in the National Guard last night: because they know this is going to affect the way people vote.

People were Googling “how do I change my vote?” in Philly.

Trump even mentioned it.

Strongly Trending (Google) since immediately after the second debate is CAN I CHANGE MY VOTE? This refers changing it to me. The answer in most states is YES. Go do it. Most important Election of your life!

I’m trying to imagine someone voting for a Democrat when there are these riots – and I just can’t imagine it.

How can anyone be “pro-riot”?

Listen, this is what you need to tell people this week:

“Riots only happen in Democrat cities.”

Fisher of Men, Hunter of Deer, Grower of Garden.

🐸 Citizen of the Internet 🐸
⏰☕🚬🚽🚿🪒🏋🏻🥓
Escaped True Master
Nancy Pelosi inbound to give a folded American flag to "Walter Wallace Jr." aka William Wallace, aka Braveheart the brave of Philly, aka Audie Murphy American Hero murdered in cold-blood by AmeriKKKan Nazi's.

Werwolf said:
Nancy Pelosi inbound to give a folded American flag to "Walter Wallace Jr." aka William Wallace, aka Braveheart the brave of Philly, aka Audie Murphy American Hero murdered in cold-blood by AmeriKKKan Nazi's.
Click to expand...

Dipshits that pretend to worship niggers for political gain...NOBODY really likes niggers. They are tools. 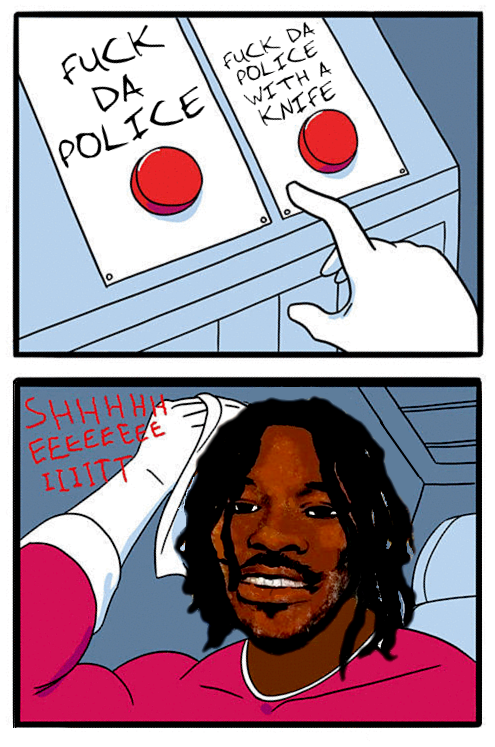 🐸 Citizen of the Internet 🐸
⏰☕🚬🚽🚿🪒🏋🏻
Escaped True Master
Who knew you could change your vote!?

Fisher of Men, Hunter of Deer, Grower of Garden.

Harbingrr said:
Who knew you could change your vote!?
Click to expand...

According to voting laws in Connecticut, Michigan, Minnesota, Mississippi, New York, Pennsylvania and Wisconsin, if you change your mind on who you wish to vote for, you can have a do-over.
Click to expand...

The city is asking residents to say indoors in West and North Philadelphia, Port Richmond, Kensington and Fishtown
Click to expand...

The residents did stay indoors, as you can see by watching the demographics of the people in the looting videos.

"Amalek" is usually reserved for the goyim in my experience, but that's why it's so hilarious when these We Wuz negroes are flipping it all around and coming back at these vampiric Jews with confrontation calling them things like "Esau" or the "Edomites" or "Amalek".

It's taking what is usually insider or Jew-for-Jew terminology and then applying it forcefully rhetorically back onto the Jews themselves. And it has the added bonus of appearing very neutral to the mind of the casual or unbiased observer or fence-sitter. The neutral says to himself that if the characterization of something like "Amalek" is good enough for the Jews to denigrate others then why is it not also allowable for others to swing that characterization right back around upon the Jews themselves whenever warranted? They think: it's not as if Jews have some sort of monopoly on various religious terminology do they?

But Jews take that sort of thing deathly serious as we know. To them it's not just another insult from the lowly goyim. Nope, because this particular insult has the added connotation that the goyim know, or at the very least that the goyim are trying very hard to know right now.

The weaponization of these words needs to continue to go both ways in a society that ever expects itself to crawl out from underneath Jewish tyranny.
Last edited: Oct 28, 2020

🐸 Citizen of the Internet 🐸
⏰☕🚬🚽🚿🪒🏋🏻🥓💻
For the second night running BLM protests reality itself.

Old World Underground
🐸 Citizen of the Internet 🐸
⏰☕🚬🚽🚿🪒🏋🏻
It's hard enough finding a decent pair of shoes that fit me taking half an hour to browse.

How the hell do these niggers do it on the run?

The ultimate nigger magnet: a combination Foot Locker and KFC.

Cave Beast
🐸 Citizen of the Internet 🐸
⏰☕🚬🚽
To soys and wahmen not suffering direct casualties of the riots, they will easily vote against orange man because of dem bad feels they get when the media covers him. Good old universal suffrage

Cave Beast
🐸 Citizen of the Internet 🐸
⏰☕🚬🚽🚿🪒
brotherly love
We need less killing it, & more illing it.

⏰☕
If trump wins theres gonna b looting too. America is done. Covid 19 baby. Have fun kids

Old World Underground
🐸 Citizen of the Internet 🐸
⏰☕🚬🚽🚿🪒
Twitter is filled with Democrats stating that you - police or citizens - have no right to kill someone in self defense. They say it is the police's responsibility to deesculate without causing harm to the dindu.

Old World Underground
🐸 Citizen of the Internet 🐸
⏰☕🚬🚽🚿🪒🏋🏻
Seems like there may be more than rioting planned for philly. 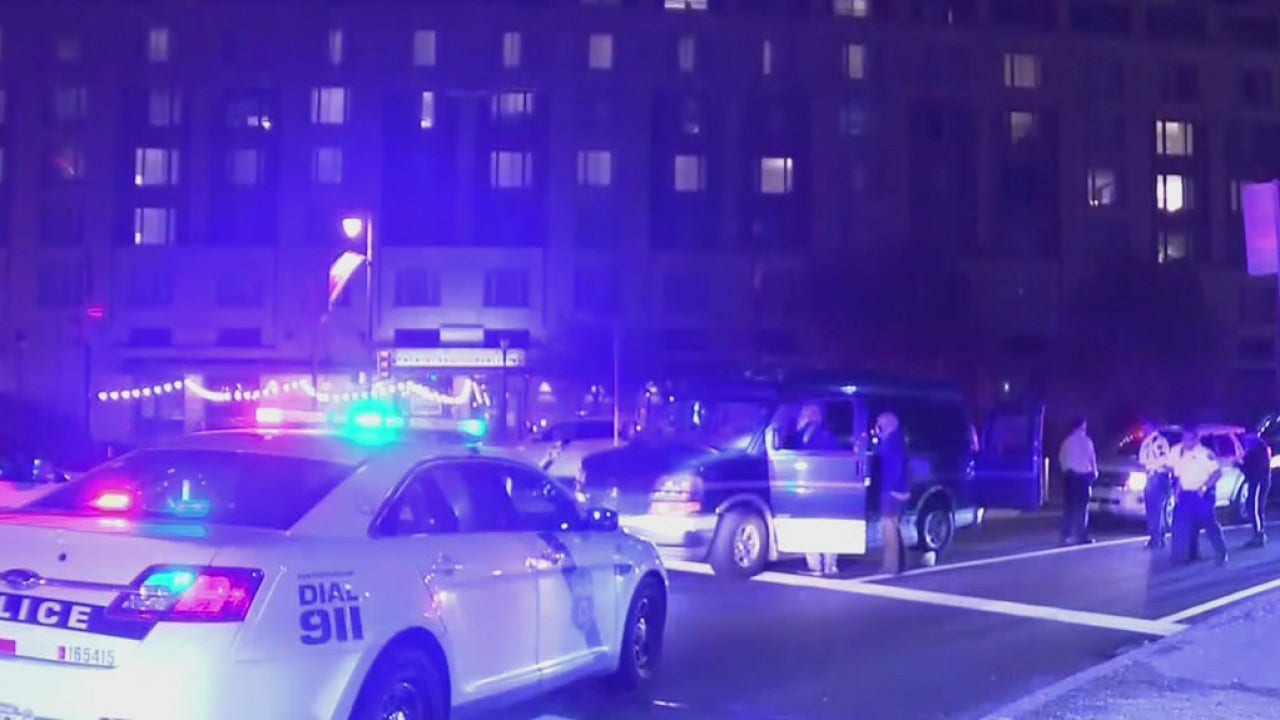 Sources tell FOX 29 suspicious devices were found inside a vehicle in Logan Circle.