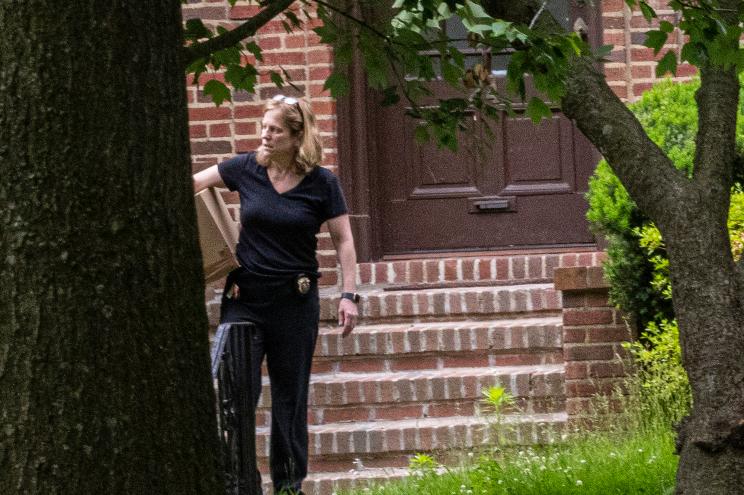 Queens DA Melinda Katz was caught using her security detail in her move from her Queens home.Kevin C. Downs for The New York Post


When it absolutely, positively has to get there … trust your bodyguards!

The borough’s top prosecutor was spotted wearing her gold DA’s badge on her hip last week as she carried four boxes of belongings to a black Ford Expedition parked outside the Forest Hills house where she’s been temporarily living since selling her former childhood home for $1.05 million in February.

She then climbed into the official vehicle and was driven about 1.2 miles by a pair of plainclothes NYPD cops to her new three-bedroom, 2-1/2 bathroom Colonial-style house, which city records show she bought late last month for $1.1 million.

The trip was one of four that The Post saw Katz, 56, and her detail make between her old and new homes Tuesday morning. Later in the day, Katz took part in an online Pride event sponsored by her office and appeared to be sitting behind the driver’s seat in the SUV, which had a row of clothes hanging from a rack visible in the rear. 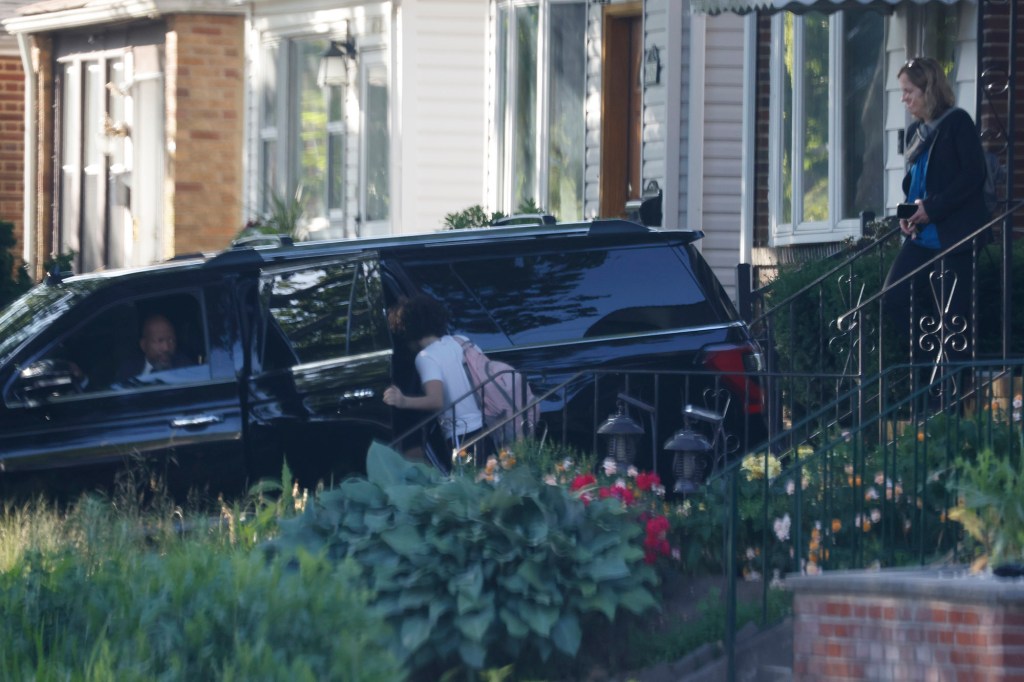 Katz’s family is moving homes, but not without help from their tax-payer-funded security detail.Kevin C. Downs for The New York Post 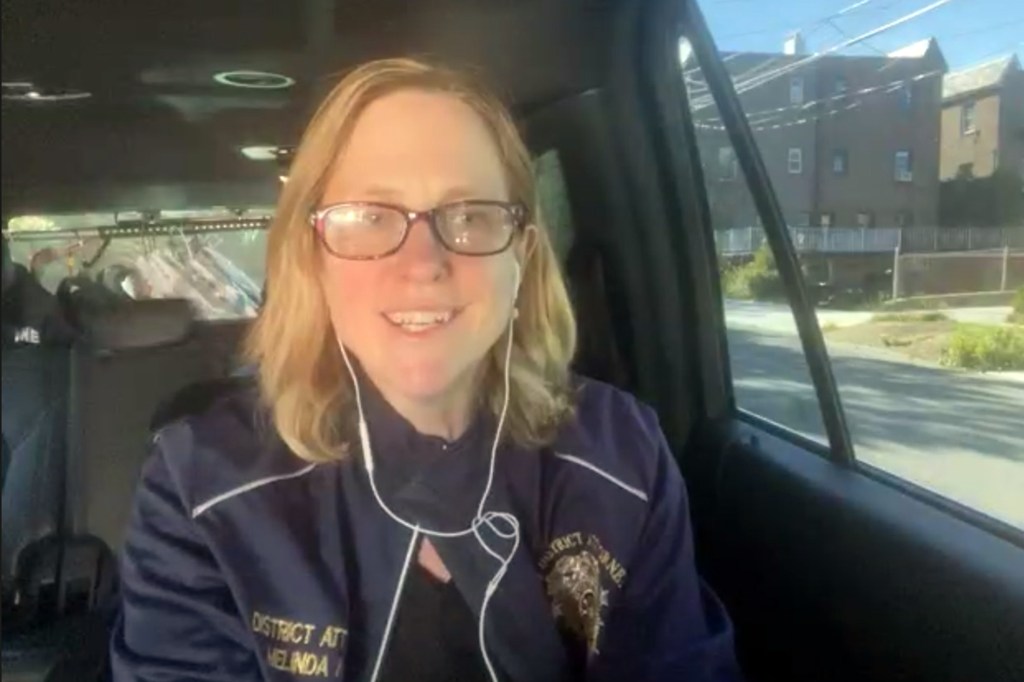 Katz spoke at a Pride seminar from her packed vehicle on June 14.

On Friday morning, The Post also saw members of Katz’s security detail carry various items to the SUV from one of the homes while picking up her and her two kids. One cop made three back-and-forth trips, and the other made two. They carried stuff in their hands and in large black plastic bags.

Sources familiar with Katz’s routine told The Post that members of her security detail also had been hauling flat-screen TVs, groceries and dry cleaning around for her, as well as loading her sons’ bicycles and sports gear into an official SUV, driving the family away and returning several hours later.

Katz also regularly had her security detail show up at her home on weekday mornings in time for her to accompany her kids as the cops drove them to school, after which she returned home, dressed for work and left around 10 a.m., sources said. 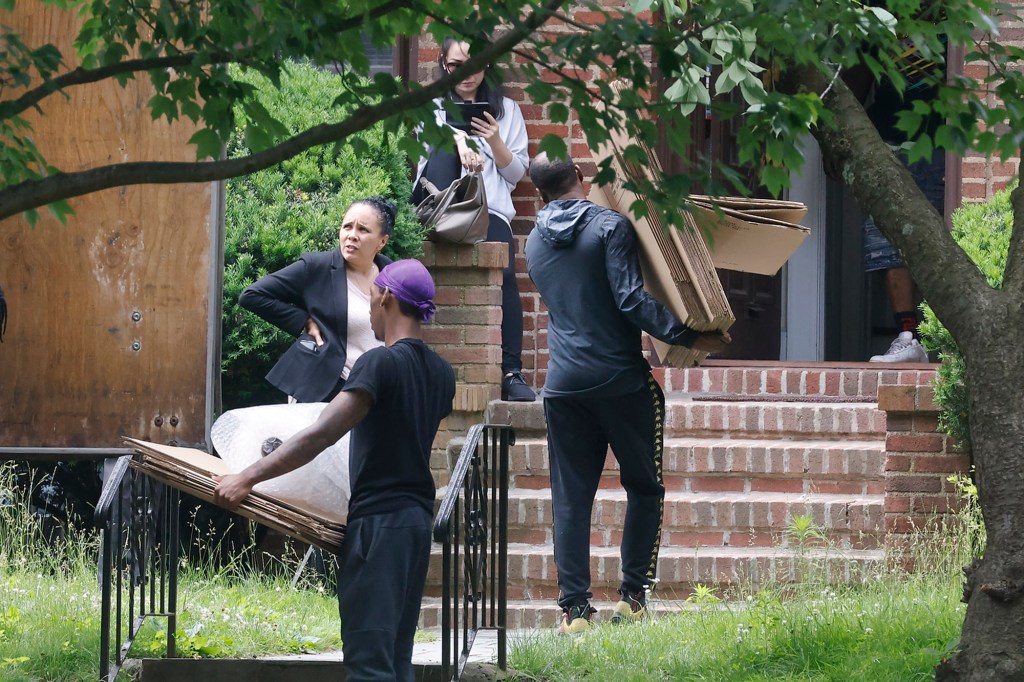 The Post captured the scene where Katz had her security detail carrying furniture for her during her move.Kevin C. Downs for The New York Post 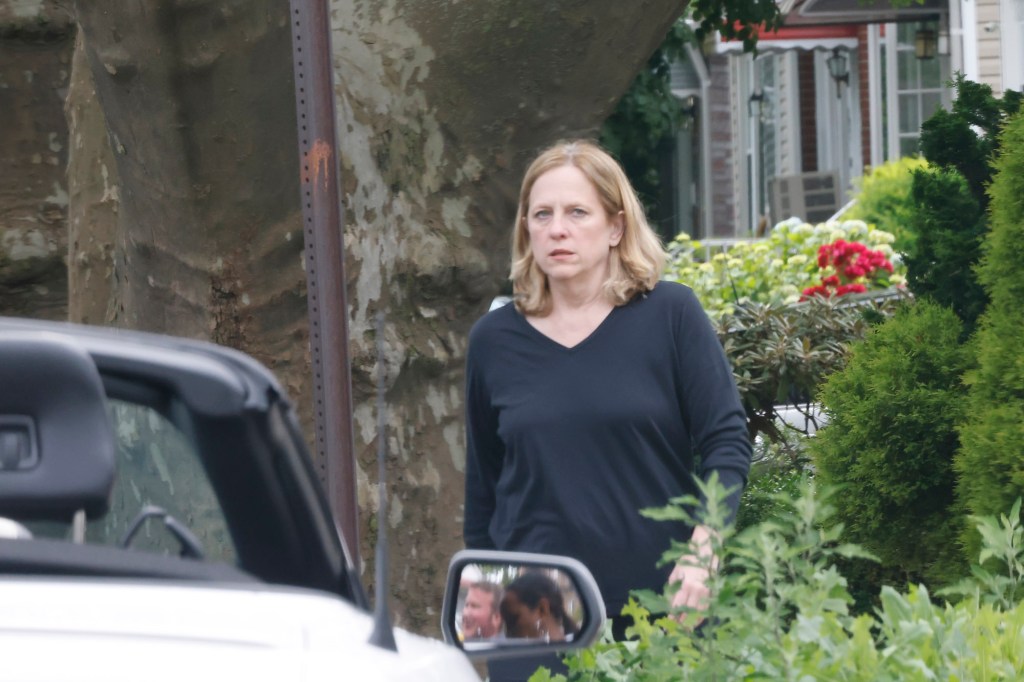 Sources close to Katz said that she had used her security detail for hauling around dry cleaning.Kevin C. Downs for The New York Post

“She uses the detectives as her personal car service,” one source said.

The moves appear to run afoul of provisions in city law that bar elected officials and other public servants from using their positions “to obtain any financial gain, privilege, or other private or personal advantage” and “from using City resources for any personal, non-City purpose.”

Those prohibitions were cited in a 2016 agreement between the city Conflicts of Interest Board and the late Brooklyn DA Ken Thompson, who agreed to pay a $15,000 fine to settle allegations that he illegally had his security detail buy him meals for which they were later reimbursed by the DA’s Office.

Blair Horner of the New York Public Interest Research Group, which advocates for government accountability, said Katz “deserves protection” because “we live in a crazy world.”

“But any elected official who needs to have their laundry picked up or their belongings moved should hire a private company to do it,” he said.

“There are a lot of elected officials who have gotten into trouble for using public resources for private purposes. Public servants are just that.”

Katz, a Democrat whose annual salary is $212,800, is a protégé of disgraced former state Comptroller Alan Hevesi, having babysat his kids and volunteered on his successful 1993 campaign for city comptroller. 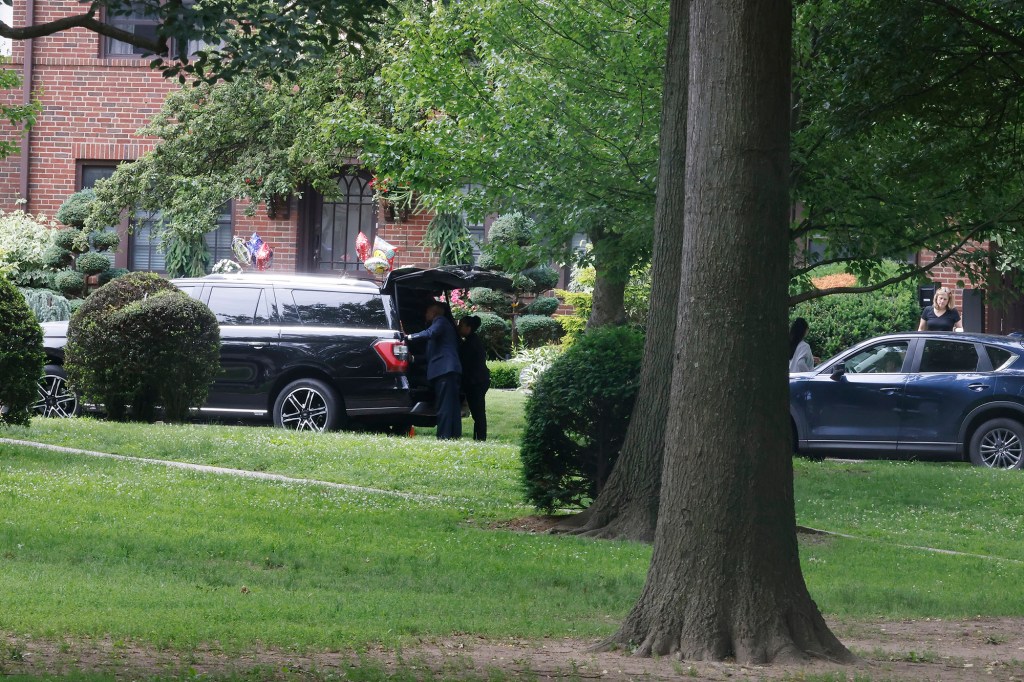 Katz was moving from her Queens home at the time, using her official vehicle and security detail as help.Kevin C. Downs for The New York Post

In return, Hevesi supported Katz’s third-party campaign to replace him in the state Assembly against the local Democratic district leader, who she defeated in a special election in 1994.

During his 2006 reelection campaign for state comptroller, Hevesi was accused by his Republican challenger of using a member of his security detail as his wife’s chauffeur for the previous three years.

Hevesi acknowledged the abuse and immediately paid $83,000 in restitution but was later ordered to cough up another $90,000, then forced to resign and serve 20 months in prison for a $1 million pay-to-play corruption scam with a state pension-fund investor. 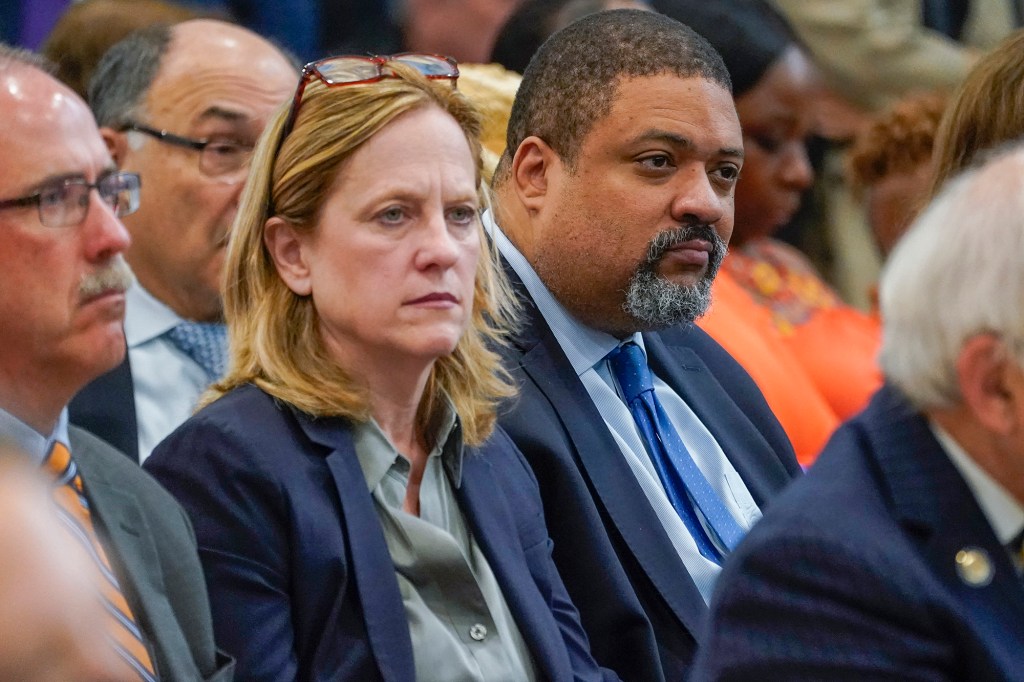 One source said Hevesi’s downfall had apparently affected the extent to which Katz relies on her security detail.

“She learned her lesson — she makes sure she is always in the car with her kids,” said the source said.

A spokesperson for the DA’s office said Katz’s NYPD detail was assigned “for protection, as has historically been the case.”

“As Chief Law Enforcement Officer of the borough, the DA’s job is 24/7,” the statement said. “Members of the detail are physically with the DA for her protection while on a schedule similar to any other working parent – they accompany her whether she hosts work meetings, attends community events, or tends to the needs of her family.”
Additional reporting by Kevin Sheehan and Nolan Hicks 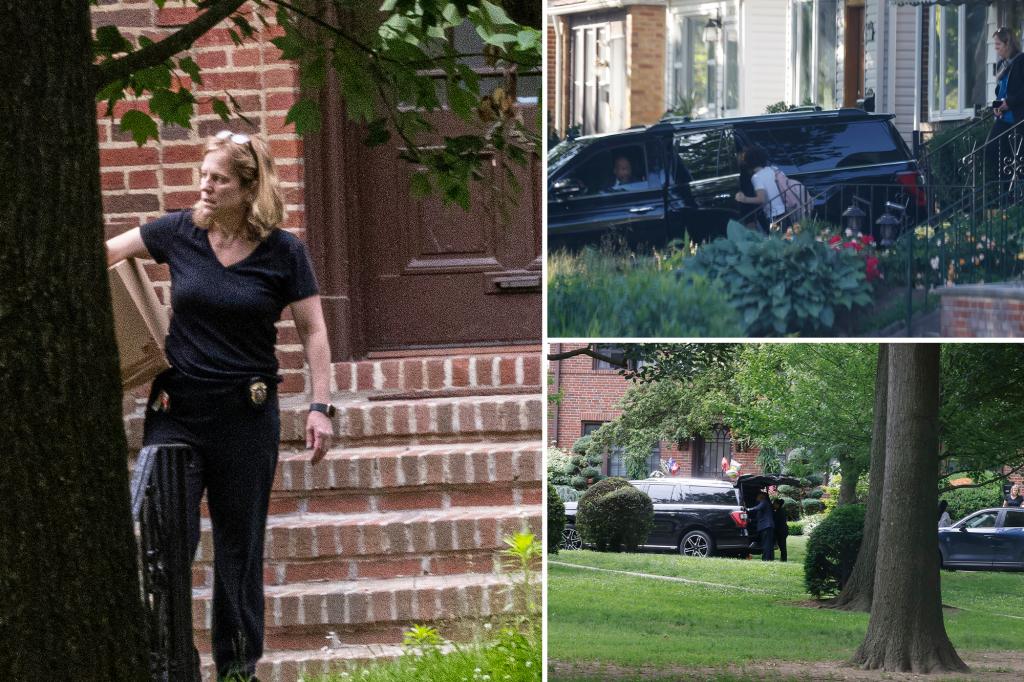 Sources familiar with Katz’s routine told The Post that members of her security detail also had been hauling flat-screen TVs, groceries and dry cleaning around for her.

Old World Underground
🐸 Citizen of the Internet 🐸
⏰☕🚬🚽🚿🪒🏋🏻
Sure looks manly to me, bull dozer jaw, male eye ridge, deep set eyes, large head, don't see an Adams Apple unless it got shaved, straight as a bean pole no hips, manly arms. Nothing earth shattering, just an impression on first view.

For a mid-50s, NYC jew, you're lucky you're not looking at this👇 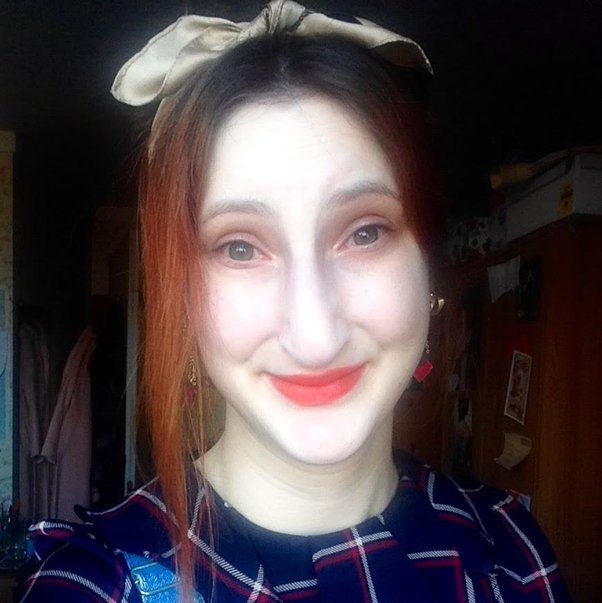 Old World Underground
🐸 Citizen of the Internet 🐸
⏰☕🚬🚽🚿
They don't call it Jew York City for no reason. And nothing screams childless bitter hag than a face like that

🐸 Citizen of the Internet 🐸
⏰☕🚬🚽🚿🪒🏋🏻
As long as idiot J-Tards feel fine fleecing the goys they don't care about the "Rule of Law"...like in Bolshevik times. Their attitude is "I told you to do this! Why didn't you do it for me!?" Idiot Jews have no remorse.

Cave Beast
🐸 Citizen of the Internet 🐸
⏰☕🚬🚽🚿🪒
Why does this rat face demon get special protection? Convenience store owners are at much higher risk and actually contribute to the city tax pool. I say end all protective details for all politicians…then let’s watch the tunes start changing.

RickGozinya said:
For a mid-50s, NYC jew, you're lucky you're not looking at this👇