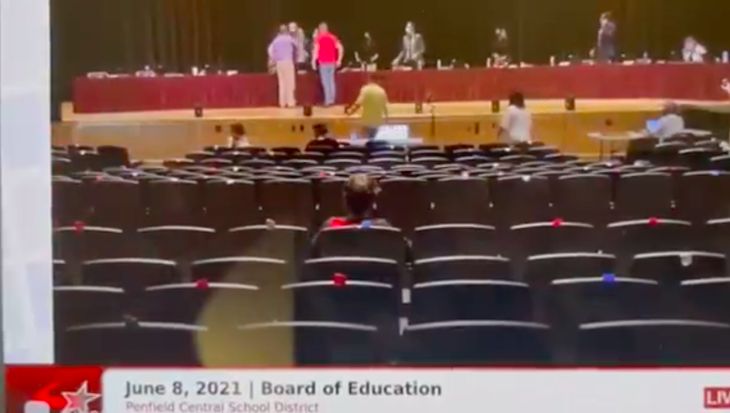 School board meeting video screenshot.
Critical race theory (CRT) is really unpopular—and that’s an understatement. All over this nation, parents are showing up at school board meetings to tell board members trying to insert anti-white racist curriculums into their children’s classrooms that they will rue the day they do this. Some of these videos are highly entertaining, like this lady vowing to be this board’s worst nightmare now that she’s retired and has nothing better to do than make them regret their decision to ever run for public office.

Today’s boardroom meltdown happened in upstate New York in the sleepy town of Penfield (which is almost all white as most of rural New York is). The Daily Wire’s Amanda Prestigiacomo had the report:

A school board member from Penfield, New York, named William Yaeger called a parent an “a**hole” following public comments from parents who pushed back against mask policy and controversial “diversity, equity, and inclusion” curriculum.
Video shows parent Rich Tyson, who has a daughter in the district, jump on stage and confront Yaeger after he told him, “You’re not gonna stand up here and do anything to me, a**hole.” Yaeger had to be physically restrained by others on the board and the meeting was halted.
Click to expand...

……The outburst followed heated public comment where parents let the board know how they felt about the continued forced masking of children despite the state ruling that masks in schools should be “optional” and the CRT curriculum and employee they were intending to vote through that night. A new position was being created for a “co-superintendent” focused solely on CRT and “justice” issues in the school. Tyson says parents were never informed about the intention to hire this person until hours before the intended vote.

The whole thing was so hush-hush that none of the parents even know the name of the intended new employee. PJ Media reached out to school board members asking for more information on the hire but did not receive a response by press time.

School boards should be on notice that CRT is going to mobilize parents to replace any board members set on pushing through this controversial issue in public schools. Tyson promised the Penfield school board members that their days on the board are numbered after this latest outrage against taxpayers.

The board adjourned the meeting after the outburst and told the public to leave. Parents claim the board members reconvened in private after the public left and continued public business behind closed doors, which would be a major violation of open meetings laws. It remains unclear if they voted on the diversity hire or not. If they did such a thing without the public present, it could result in a lawsuit. One thing is certain: parents are fed up with school boards.

Old World Underground
🐸 Citizen of the Internet 🐸
⏰☕🚬🚽🚿🪒🏋🏻🥓
I thought what the hell, I'll dox him since I hate school board types too.

Mr. Yaeger holds his master's and bachelor's degrees in Education from SUNY Buffalo. He currently works as a Social Studies teacher at the Eugenio Maria de Hostos Charter School. Mr. Yaeger and his wife, Meaghan, have three children. 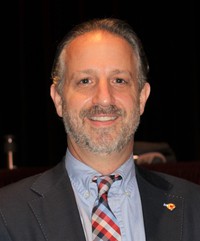 🐸 Citizen of the Internet 🐸
⏰☕🚬🚽🚿🪒🏋🏻🥓
As a father and taxpayer myself, I find it disturbing that this forced teaching is going on. I haven't heard about any plans in our district for the race bullshit but I am keeping an ear to the ground if/when it happens. My child will not be attending any of those brainwashing sessions.

I sided with Captain Bligh

A new position was being created for a “co-superintendent” focused solely on CRT and “justice” issues in the school.
Click to expand...

And imagine what the salary will be.

I don’t know if there’s a school system anywhere that spends as much on educating kids as it does on administration.

I couldn't find anything to indicate he's a kike. In fairness, "Yeager" or derivatives thereof ("Jager," "Yager," etc.) is a very common German name. (It means "hunter.") It's not specifically jewish.

He may just be a run of the mill shabbos goy.

NatZ_Bill said:
And imagine what the salary will be.

I don’t know if there’s a school system anywhere that spends as much on educating kids as it does on administration.
Click to expand...

At all levels of education, the administration runs the show today; even at universities, the admin has more power than the faculty.