Imagine all of the things you want in a new Dungeons and Dragons campaign.

If the thing you’re imagining is “what a hot mess college life can be,” then I’ve got news for you, pal: you’re in luck.

D&D’s Strixhaven campaign has mechanics for ‘what a hot mess college life can be’ https://t.co/hk8dAHQR7o pic.twitter.com/zO3fBcB4rO

According to the art for the new Strixhaven campaign, this involves being an elf tranny and having sex with black men. Obviously, that’s what is implied by “hot mess college life.”

You may be thinking: “how does Wizards of the Coast even still exist, having so alienated their normal fanbase with all of this interracial tranny stuff?”

Well, it’s very simple: black people and trannies are really getting into D&D. So they just switched out their customer base for a different customer base.

Or, thus is the plan.

We’re still not really sure how exactly D&D is supposed to appeal to the blacks, who appear to have other cultural interests.

"During the first half of this year, there were 47 fatal or near-fatal hit-and-run crashes… the highest total in any six month period since at least 2015"

We must crack down on fatal hit-and-run incidents & hold reckless drivers accountable.https://t.co/oZw7cGRDz3

17-year-old charged with murder in the death of 73-year-old carjacking victim Keith Cooper is the 27th person to be accused of killing, trying to kill, or shooting someone in Chicago this year while on bond for another felony.https://t.co/t0z6jRxbCv

Yikes. Talk about a hot mess…

No, sorry – that was racist.

I understand that murder is just a part of the vibrant culture of the blacks.

Who am I to judge?

Despite cultural differences, there is no reason to believe that some time very soon, blacks won’t start playing D&D. They don’t work, so they should have plenty of time to play between murdering old people and children.

They also have money for new campaigns with all the loot they steal and make from selling crack.

Really, it just made perfect business sense for Wizards of the Coast to attack their own customer base aggressively and try to market their products to blacks. You’d have to be a total buffoon not to understand this.

Cave Beast
🐸 Citizen of the Internet 🐸
⏰☕🚬🚽🚿
Even the soulless bugmen I know don't want this campaign. That's really saying something too, because these guys are lvl 20 consoomers. They buy all this bullshit but won't touch this one.

Karl Franz said:
Even the soulless bugmen I know don't want this campaign. That's really saying something too, because these guys are lvl 20 consoomers. They buy all this bullshit but won't touch this one.
Click to expand...

Don't need 'em. Got a new batch of coonsoomers on the way any day, Jose! 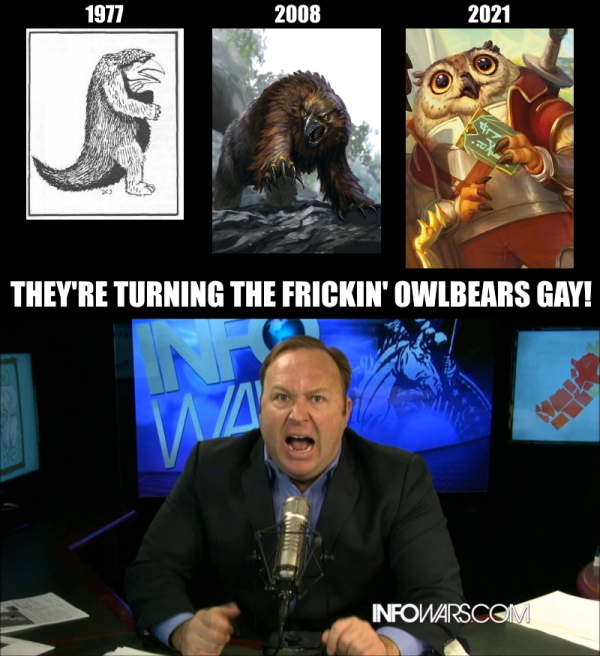 Cave Beast
🐸 Citizen of the Internet 🐸
⏰☕🚬🚽
This will probably sell. The only "people" still playing pozzed DND 5e are fat women, peak soymales and assorted sexual degenerates. The initial customer base of nerdy white males has been completely replaced by now.

Old World Underground
⏰☕
3.5 will be the official D&D edition of the Aryan Ethnostate.

If it's All White it's All Right.

Old World Underground
⏰☕
Basically White Men who aren't gay or absolute soyboy's and want to play tabletop play a myriad of other things.
Much like how Indie-gaming became Whitemens territory after gamergate.
Pathfinder (The less pozzed DnD) old school 3.5, Whitewolf's IPs (Despite being liberals the old world of darkness for example is pretty good all around) GURPS (Crunchy and mechanics heavy, but therefore appealing to thinking men and extremely flexible as a system) Anima, for Weebs specifically it's a system of choice and is legit and also made by some Based Spanish people. amongst a myriad of other systems for more traditional Western Fantasy varying by degree of power/magic, Sword and Sorcery for example, etc.

Wizards of the Coast realizes White Straight Men moved on to other card games (since MTG is garbage these days) and other Tabletop systems, and that White Men can be creative and make their own damn setting so they don't need to buy modules which are basically GMing For Dummies guidebooks.

So basically, they have little to lose from this, but potential money to be made. Of course if they hadn't alienated their entire fanbase to begin with they'd have more money, but it's never been about money really, it's all social engineering on every level.

Postnote: Anima features attractive women, no fatties except horrible monsters in a few places, a setting with actual gender roles, including women having a penalty to size/strength, a based Christian Church that has Saints with real magic/thaumaturgy, and the most powerful man in the world is a White Renaissance man that seeks FREEDOM from Illuminati/Technocrats trying to control the world in the shadows. It's Based.
You must log in or register to reply here.
Share:
Facebook Twitter Reddit Pinterest Tumblr WhatsApp Email Link
Top