The University of Iowa police department arrested a man for disorderly conduct and disturbing a lawful assembly after he allegedly disrupted a Turning Point USA presentation featuring Newsmax’s The Benny Report host Benny Johnson, destroying a projector in the process. Johnson described the attack on social media as “a low-T leftist strung-out on pure soy snapped into a violent rage.”


Police have arrested Travell Wright of Iowa City, Iowa, on charges of disorderly conduct and criminal mischief, according to a criminal complaint sent to Breitbart News by the University of Iowa Public Safety office. A LinkedIn page reviewed by Breitbart News states that Travell Wright is a student at the University of Iowa, and also uses “He/They” pronouns.


The incident was also caught on video. In the footage, a man identified as Wright by police is seen marching to the front of the room as a video meme mocking Vice President Kamala Harris plays on a projector screen. The man then dropkicks the projector, sending it flying, and ending the visual presentation.


“Racist ass bitch! Fuck you!” Wright proclaimed as he walked away after kicking the projector down.


Johnson reacted to the incident in a statement posted to social media, explaining, “I was giving a peaceful speech to the University of Iowa Turning Point USA chapter about memes.”


“During our presentation we played a harmless meme of Kamala Harris welcoming a bus full of migrants, set to tasteful mariachi music,” Johnson added. “That is when a low-T leftist strung-out on pure soy snapped into a violent rage.”


The University of Iowa did not immediately respond to Breitbart News’ inquiry about whether it condemns Wright’s actions or if his conduct is considered acceptable behavior representative of university values.
Click to expand... 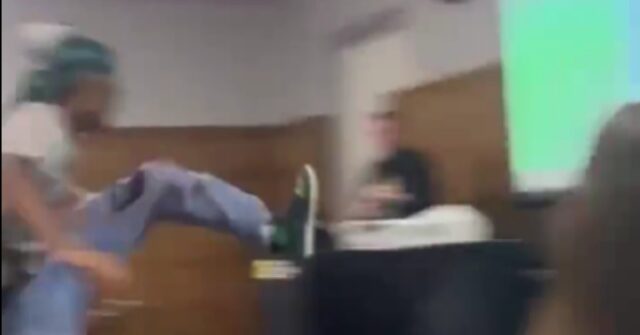 The University of Iowa police department arrested a man for disorderly conduct and disturbing a lawful assembly after he allegedly disrupted a Turning Point USA presentation featuring Newsmax's The Benny Report host Benny Johnson, destroying a projector in the process. Johnson described the...

Old World Underground
👑
🐸 Citizen of the Internet 🐸
🎩
⏰☕🚬🚽🚿🪒🏋🏻🥓💻⛪️🍖 💻
I most like the confounded looks from the innocent White boys sitting around the classroom watching this real nigga wreck shit, lol.

I bet there's no one with more cognitive dissonance in America right now than these young White kids at college.

👑
🐸 Citizen of the Internet 🐸
🎩
⏰☕🚬🚽🚿🪒🏋🏻🥓💻⛪️🍖 💻
Now we know why blacks were put into Universities because it certainly wasn't to improve the value of the pieces of paper handed out to them or enhance the learning environment.

TPusa members: take a good long look at that ape's facial expressions during that episode. He and his ilk are testing the waters. They don't want to stop racism, they want to kill you and eat your flesh.

🐸 Citizen of the Internet 🐸
⏰☕🚬🚽🚿🪒🏋🏻
Escaped True Master
it is even more races to describe the gorgeous child African buck of vibrant diversity as a low t soy junky.

I suppose, had he described the assailant as a black adult male or adult African male the meme presenter could have been place in jail for a domestic terrorist hate crime.