Jews assault cops in New York during another public funeral 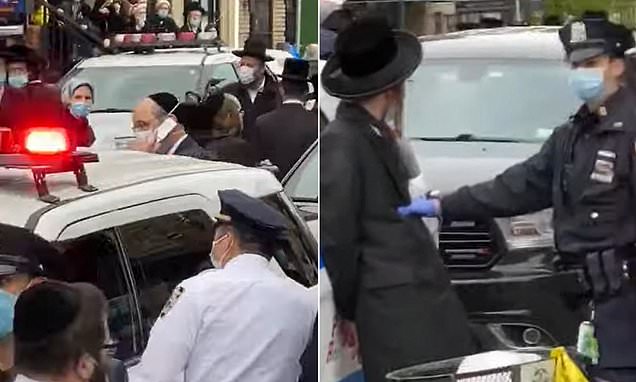 Chaos broke out between law enforcement and mourners at the Orthodox Jewish funeral of Rabbi Cheskel Wagshel in Borough Park Thursday.

This is a crazy story. These Jews know that public funerals aren't allowed, yet they decided to openly mock the goyim by holding one in Brooklyn. The cops, unsurprisingly, tried to break it up, and got assaulted by the rabbi's little twerp grandson. The cops ended up having to chase the guy's hearse down the street, which was caught on camera. For some reason, the Daily Mail is presenting this as an example of Jewish oppression, despite the mourners getting off with a warning. Unsurprisingly, they didn't offer an example of white people holding public funerals with thousands of participants, or any other race for that matter.

When whites protest the virus, it's because we think it's basically a hoax. When Jews do stuff like this, they just don't care about gentile lives or rules at all.

🐸 Citizen of the Internet 🐸
⏰☕🚬🚽🚿🪒🏋🏻
The Golem is turning on its master. I don't know who to root for here. Hopefully nobody comes out unscathed in this struggle between bad and evil.

Old World Underground
Jews will use this as an example to say:
See Goyim, Jews are sufferink too.

Northwestguy said:
this struggle between bad and evil.
Click to expand...

Wait, which one is which?