The Jewish tranny Ezra Miller, who played The Flash in the Justice League movie, and was scheduled to play the character in a Flash movie, attacked a woman this week in Iceland.

He was in a store, and a woman, apparently a fan, approached him and he choked her and threw her on the ground.

Some defenders of the Jew are saying that he was just playing around, noting that the woman has a smile on her face. She did come up to him doing play-fighting, I guess referencing his role as a superhero. Then he said “oh, you wanna fight, huh?”

I hope the woman comes out and says it was an assault, because this will destroy his career.

The guy is clearly always on drugs in interviews when he’s railing against the patriarchy.

Anyway, it doesn’t really matter at this point. It’s not like they’re going to be making all these movies after the hysteria from the virus breaks. Ain’t nobody gonna be going to see no movies.

All of this stuff is going to get canceled.

Of course, they’re going to have to provide some form of entertainment to keep the people sedated, but it will all be Netflix. Maybe some of these movie franchises will move to streaming services. If people can’t afford the $15 a month for Netflix, the government will pay it, because that will help keep people from rioting.

Anyway, this clip of the Jew tranny attacking will lead to some good laughs, I think.

So much for rejecting toxic masculinity.

People on Twitter are depressed that the hero of trannyism – the first tranny to be a big star – has turned out to be an unstable person.

Because no one could have predicted that.

god dammit ezra miller i thought i could TRUST YOU pic.twitter.com/iUajDezGdx

Why do I feel so betrayed with the Ezra Miller’s video?… pic.twitter.com/EV9BGq2IwE

Ezra Miller turns out to be problematic I fucking hate 2020 pic.twitter.com/s2EhXjgPrK

Old World Underground
🐸 Citizen of the Internet 🐸
⏰☕🚬🚽🚿🪒🏋🏻🥓
Someone has to do the woman-bashing. Nature abhors a vacuum.

Old World Underground
⏰☕🚬
Interesting exchange in the comments: "calling an ethnically jewish person white is not exactly a good take" to which was replied "they refer to themselves as white all the time". Whatever could they mean by this? 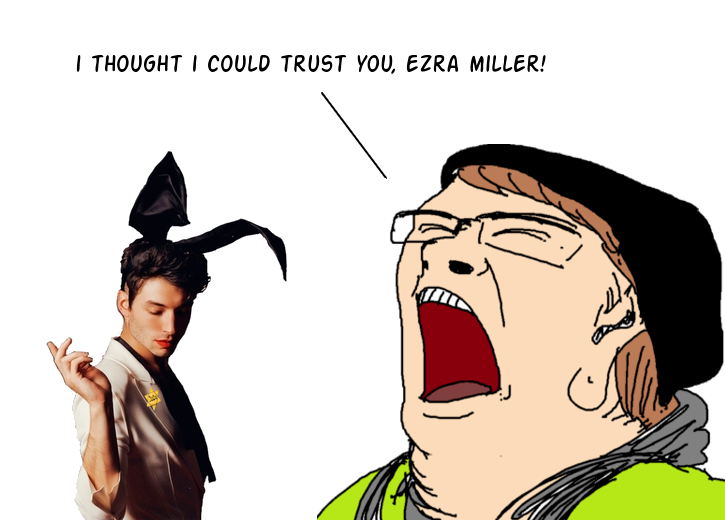 He drank too much of his own Jool-Aid and was high as a kite.

So, the way I see it, he started off as joking around but then decided to elevate it due to his own boredom and drugs.

Trannies are inherently insane, even when they're not constantly shooting up to offset their depression.