What's going on here? Israel softening up Iran before a first strike?

BY TYLER DURDEN
TUESDAY, OCT 26, 2021 - 12:50 PM
Iran has announced that the country's energy infrastructure was hit by a massive cyberattack on Tuesday, which left state subsidized gas stations across the country out of commission, resulting in very long lines of cars observed waiting to fill up in many towns and cities.
The timing is interesting given it happened near the two year anniversary mark of deadly nationwide protests following serious gas shortages and price hikes in the fall of 2019. The 'activist' nature of the hack is further revealed in that Iranian media is reporting that a message showed up in national computer systems that were hacked that addressed Ayatollah Ali Khamenei with the words, "where is the gas?" 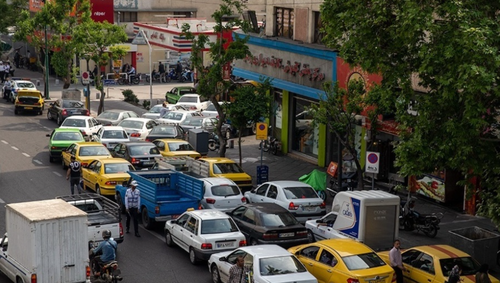 According to The Jerusalem Post, Iranian officials are already suspecting a US or Israeli intrusion: "With the exact details still hazy, there is already rife speculation about whether the purported cyberattack came from the US, Israel or a range of local Iranian anti-regime groups."
There's also the possibility of well-funded Iranian opposition and dissident groups, namely the MEK, or "People's Mujahedin of Iran" - which has itself been known to work with Israel's Mossad intelligence agency.
Iranian state media had confirmed the hack of crucial energy systems, earlier on Tuesday, saying that some of the problems at swamped gas stations have begun to be resolved:

Local news agencies reported on Tuesday that long queues that had been formed in front of gas stations in large Iranian cities had cleared up after Oil Ministry authorities dispatched teams to the forecourts to enable offline fuel delivery.
Iran’s National Virtual Space Center also issued a statement confirming that a cyberattack had targeted the online fuel delivery system in the country.
Click to expand...

"Related departments are working to fix the problem and fuel delivery services will return to normal within the next few hours," the official statement said.

And according to other state sources cited in the Associated Press, the hackers had posted the phone number that's known to be a hotline run directly through Khamenei's office that handles matter related to Islamic law:

State TV said Oil Ministry officials were holding an "emergency meeting" to solve the problem. Some gas stations that accept only cash and are not in the subsidy card network continued pumping fuel.
The use of the number "64411" mirrored an attack in July targeting Iran’s railroad system that also saw the number displayed. Israeli cybersecurity firm Check Point later attributed the train attack to a group of hackers that called themselves Indra, after the Hindu god of war.
Click to expand...

What appears to have been targeted in the online system the government uses to ration subsidized fuel, which entitles citizens to 60 liters of gasoline per month at a price of 15,000 rials ($0.54), state media notes.
No specific group or country has yet to claim responsibility for the hack, but it's clear that it's intended to stir up dissent, also as the populace struggles in the midst of crippling US-led economic sanctions intent on completely isolating the country.
9,63362

What's going on here? Israel softening up Iran before a first strike?
Click to expand...

Nah, probably a trial run for the US.

GoodOlboY said:
Nah, probably a trial run for the US.
Click to expand...

Israel did recently start doing first strike drills for an attack on Iran for the first time in a while though.

If you are about to engage in war, you generally soften up the enemy.