Barbados has announced its intention to remove Britain's Queen Elizabeth II as head of state and become a republic by November next year, as the Caribbean island nation seeks to move fully beyond its colonial past.

The decision was formalised in the so-called Throne Speech, delivered on behalf of Prime Minister Mia Mottley by the island's Governor-General Sandra Mason to mark the state opening of parliament yesterday.

More than half a century after attaining independence from Britain, "the time has come to fully leave our colonial past behind," Ms Mason said.

She said: "Barbadians want a Barbadian Head of State.

"This is the ultimate statement of confidence in who we are and what we are capable of achieving."

Ms Mason said "Barbados will take the next logical step toward full sovereignty and become a Republic by the time we celebrate our 55th Anniversary of Independence", which will be marked on 30 November 2021.

When asked about the speech, a Buckingham Palace spokesman said: "This is a matter for the government and people of Barbados."

Queen Elizabeth is head of state of the United Kingdom and 15 other formerly-British ruled countries, where she is represented by the governor-general.

Many Barbadians have called in the past for removing the queen's status, due to its lingering imperialist associations, and several of the island's leaders have advocated becoming a republic.

A government-appointed commission concluded in 1998 that Barbados should become a republic with a non-executive president as head of state to replace the queen, but the recommendation was not acted upon.

Ms Mason cited a warning by the country's first prime minister, Errol Walton Barrow, who had cautioned against "loitering on colonial premises", saying: "That warning is as relevant today as it was in 1966."

"Having attained Independence over half a century ago, our country can be in no doubt about its capacity for self-governance," she said.

A number of nations have removed the queen's status as head of state since achieving independence, while remaining part of the 54-member Commonwealth, with Mauritius the last to become a republic, in 1992.

During Queen Elizabeth's reign, eight referendums have been held on becoming a republic, of which three passed: Ghana (1960), South Africa (1960) and The Gambia (1970).

Barbados is sometimes called "Little England" for its loyalty to British customs.

The move by Barbados comes as the historic role of the British empire comes under renewed scrutiny, as part of a global reckoning on race relations and the colonial past fuelled by mass anti-racism protests in the United States.
Click to expand... 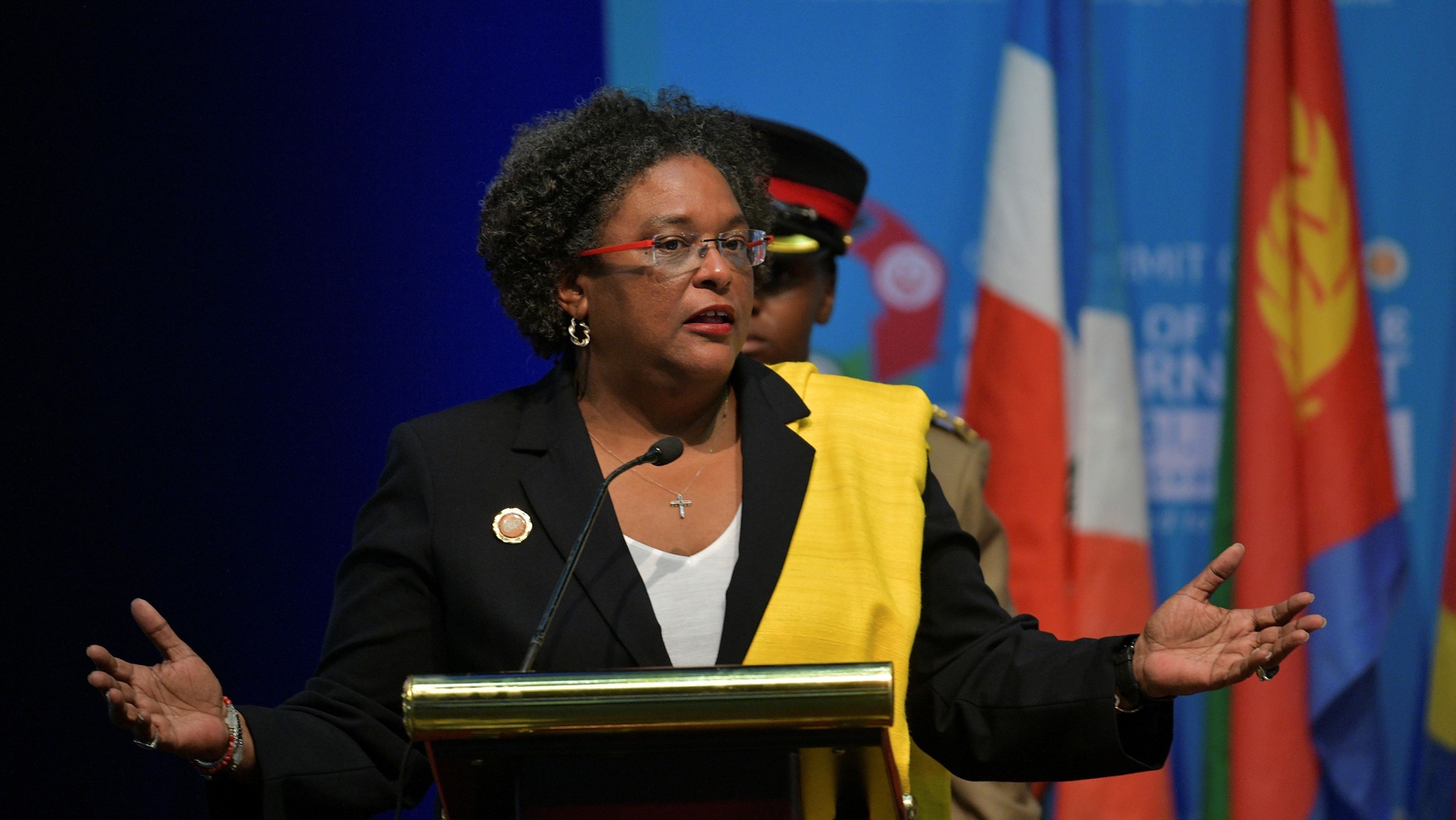 Barbados to remove Queen Elizabeth II as head of state

Barbados has announced its intention to remove Britain's Queen Elizabeth II as head of state and become a republic by November next year, as the Caribbean island nation seeks to move fully beyond its colonial past.

Same-sex unions to be recognized in Barbados

BRIDGETOWN, Barbados (CMC) — The Barbados Government has signaled its intention to recognize same-sex relationships and to reduce the penalties for people caught with a quantity of cannabis commonly referred to as a “roach” or “spliff” on the streets.

Governor-General Dame Sandra Mason, addressing the opening of a new term of the Barbados Parliament, said that the island has always been in the vanguard of pioneering social justice, the protection of civil rights, and the battle to ensure dignity to the poor, marginalized, vulnerable, and dispossessed.

“Our generation must do no less, for compassion, decency, empathy, kindness, fairness, and justice are what characterizes us as a people,” she said, noting that it was the Charter of Barbados signed here in 1652 that gave rise to the expression “no taxation without representation”, which became the rallying cry for American colonists to break with Britain and precipitate the American War of Independence.

Dame Sandra said that the legal systems of modern societies recognize many different forms of human relationships and that Barbados is now increasingly finding itself on international lists, including within the multilateral system, which identifies the island as having a poor human rights record.

“Barbados does not conduct business, trade with itself, or give itself loan funding. In some cases, our human rights record, when viewed against modern international standards, impacts these other issues and how we are viewed amongst the global family of nations.

“On this matter, the world has spoken. If we wish to be considered amongst the progressive nations of the world, Barbados cannot afford to lose its international leadership place and reputation. Nor can a society as tolerant as ours allow itself to be blacklisted for human and civil rights abuses or discrimination on the matter of how we treat human sexuality and relations.”

She said that the Mia Mottley-led Administration will do the right thing, understanding that this, too, will attract controversy.

“Equally, it is our hope that with the passage of time, the changes we now propose will be part of the fabric of our country’s record of law, human rights and social justice,” the governor-general said, adding that in this regard the Government “is prepared to recognize a form of civil unions for couples of the same gender so as to ensure that no human being in Barbados will be discriminated against, in the exercise of civil rights that ought to be theirs.

“The settlement of Barbados was birthed and fostered in discrimination, but the time has come for us to end discrimination in all forms. I wish to emphasize that my Government is not allowing any form of same-sex marriage, and will put this matter to a public referendum. My Government will accept and be guided by the vote of the public as promised in the manifesto.”

She said that a second issue that requires compassion, understanding, empathy, and the intervention of the Government is the conviction and incarceration of scores of young men and some women, causing them to lose their jobs, reputation, opportunity to travel, and to become stigmatized over minuscule quantities of marijuana.

She said pursuing these matters is a waste of police and court time, and the Government’s manifesto noted that the matter of the recreational use of marijuana was promised as the subject of a referendum.

“My Government will honor this promise. However, my Government is conscious of the fact that we have witnessed across the globe, everything from the introduction of medical marijuana to the acceptance of recreational marijuana, to the lawful sale of marijuana candies, chocolates, creams, and teas.

“In the last two years, the world and sister countries in the Caribbean, have moved decisively toward forms of liberalization, while we in Barbados remain stuck in modes of criminalization and stigmatization – a state which did not exist in the Caribbean 100 years ago, according to the Caricom Regional Commission on Marijuana.”

The head of State said that a significant amount of the time of law enforcement officers and of the magistrates’ courts is taken up with dealing with individuals with small quantities of cannabis.

“A large number of these cases are minor, but required the deployment of significant police resources in investigating, processing, taking statements, and taking the cases through to trial. This process has little or no redemptive value and in human terms, a large number of our young men are forever left with the taint of the drug charges and the possible conviction.

“It is imperative that we take immediate steps to find an alternative way of dealing with our young men and women who are found with small quantities of cannabis, so that they are educated about, and treated for their drug use, while at the same time, not trivializing the criminal nature of their conduct.”

She said, as a result, the Government will therefore amend the Drug Abuse (Prevention and Control) Act to provide that possession of 14 grams, or half an ounce or less of cannabis is no longer an offense for which one can be arrested, charged and tried, and will therefore not result in an appearance before the magistrate’s court or in a criminal record.

“The possession will still be unlawful, and will still be punished, but there will be a new approach to how we treat the offender, which is already being used successfully in Jamaica and St Vincent.”

The governor-general said that the police may issue a ticket to a person in possession of half an ounce or less of cannabis, similar to a traffic ticket, and the person has 30 days to pay a fine of BDS$200.

“The ticket will be called a “fixed penalty notice”, she said, adding that a person in possession of half an ounce or less and who is under 18 years, or who is 18 years or older and appears to the police to be dependent on cannabis, will be referred to the National Council on Drug Abuse for counseling, in addition to paying the ticket.

A person who smokes cannabis in public will not be arrested or detained. The police may issue a ticket to that person, who will have 30 days to pay the ticket.

It will be an offense to fail to pay a ticket for smoking in public or for possession of half an ounce or more. The offender is required to attend magistrates court and may be ordered to do community service or pay a fine of BDS$1,000. A conviction for failing to pay a ticket will form part of the offender’s criminal record.

“This is not a license for lawlessness and my Government recognizes the link between serious drugs and crime but is also cognisant of international trends and the social realities of Barbados,” the governor-general added.
Click to expand...

Old World Underground
🐸 Citizen of the Internet 🐸
⏰☕🚬🚽🚿🪒🏋🏻
Who cares not a real country. I really hate that the queen is still queen over these savages. Let them go back to Africa and hopefully the island will be occupied by a civilized race. Who would want to rule over an island of apes.